The Gospel According to Les Mis 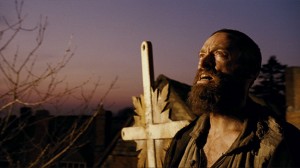 I used to avoid musicals. Didn’t get the point of interrupting good acting with singing. That was until I heard Les Miserables for the first time.  Les Mis is all singing and so by rights, I should dislike it as well. But what songs! When Valjean sings “Sweet Jesus what have I done/become a thief in the night/Become a dog on the run?” I begin to feel the stigma of living under the French parole system where one is always guilty and will ever be a criminal. When Javert the policeman tells Valjean that “I was born inside a jail/I born with scum like you/I am from the gutter too.”  I can begin to see that both men are two sides of the same coin. The story of Valjean and Javert is the story of two men and how they react to unmitigated, undeserved grace. And in that sense it really is all of us. It is Gospel in miniature.

After being released on parole, Valjean tries to find work but no one will hire an ex con and when he is taken in by a bishop for the night cold and hungry, he repays the kindness by stealing silver. When the police bring him before the bishop, we expect justice to be done but instead we find perplexing, awe inspiring grace:

“But my friend you forgot these also” I absolutely love the look on Valjean’s face. That sort of consternation at undeserved kindness is one of the very few weapons Christians can use to completely pierce the armored hearts of modern Americans layered with cynicism and distrust. To give people not only mercy but undeserved grace is insanity to a cynic, but in Valjean’s case it changes his entire world view. He is no longer mad at God but dedicated to him. He begins his discipleship by sacrificing his his money to buy back the daughter of a destitute woman he inadvertently had fired from his factory. He works out his salvation with fear and trembling.

Later Valjean extends mercy to Javert when Javert is captured by the French revolutionary students which Valjean helps. Javert is sure that Val Jean will take revenge because his nature is criminal.  Javert still thinks of Valjean as prisoner 24601.  What Javert doesn’t realize is that Valjean’s nature has changed because of the grace given him and he extends mercy to Javert for that reason.

“There are no bargains or petitions” but Javert cannot abide this mercy. To a cynic it is insane, or as Paul says, “It is foolishness.” Javert and Valjean run into each other again. And again Valjean’s changed character perplexes Javert. When Javert finds Valjean he is standing over the injured body of young Marius. Valjean pleads with Javert to have mercy and let Valjean get the boy to a hospital.

Mercy and the Law are incompatible for Javert. Javert cannot accept forgiveness. There is only law and as he says, “the law is not mocked.” In one of my favorite songs, “Stars” Javert sums up his worldview with these lines about God’s judgment.

“And so it has been and so it is written on the door way to paradise that those who falter and those who fall must pay the price.”

Javert is correct of course but only half correct. His is a world of judgement without grace. He has no room for the forgiveness that changed Valjean. He has no room for the mercy Valjean extends to him. And of course that refusal to accept doesn’t come from his honoring of the words written on the doorway to paradise. It comes from his own stubborn pride. The only sure fire protection from grace is pride. Stubborn pride that says, I will do it on my own. If I fall I fall. If I win I win. But that pride changes a man. Hardens him. Javert says, “He gave me back my life . . . and I live in hell.”

The real torment of hell is not some caricature of God’s judgment. It is that one cannot, will not ever yield one’s pride.  He is stuck and cannot grow. As C.S. Lewis said, one must “hatch or go bad” and Javert refuses to hatch. “I will not yield at the end of the chase. I will spit his pity right back in his face.” So Javert kills himself by jumping off a bridge rather than accept mercy:

Valjean however reaches the end of his life having grown in God. He is greeted at death by those who meant the most to him. The priest who first extended him mercy and grace and Fantine, the woman who gave her child into his keeping. That child gave Valjean a purpose God could use to make him into someone who can glorify God. Throughout the musical the refrain “Do you hear the people sing” has been an anthem of angry political revolution. “Do you hear the songs of angry men. It is a music of a people who will not be slaves again!” but at Valjean’s death, the theme changes. Ultimate revolution is redemption. And the kingdom of God is the only true triumph somewhere beyond the barricades of angry resistance. In words that could easily paraphrase Isaiah and Paul, the chorus sings:

For the wretched of the earth
There is a flame that never dies
Even the darkest night will end
And the sun will rise.

They will live again in freedom
In the garden of the Lord
We will walk behind the plough-share
We will put away the sword
The chain will be broken
And all men will have their reward!