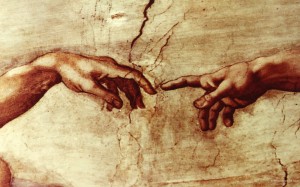 An old joke illustrates just how radical and trans-formative the concept of creation and creator is.

God was once approached by a scientist who said, “Listen God, we’ve decided we don’t need you anymore. These days we can clone people, transplant organs and do all sorts of things that used to be considered miraculous.”

God replied, “Don’t need me huh? How about we put your theory to the test. Why don’t we have a competition to see who can make a human being, say, a male human being.”

The scientist agrees, so God declares they should do it like he did in the good old days when he created Adam.

“Fine” says the scientist as he bends down to scoop up a handful of dirt.”

“Whoa!” says God, shaking his head in disapproval. “Not so fast. Make your own dirt.”

This joke is still funny and still relevant even if one believes as Pope Francis declared: “The Big Bang, which today we hold to be the origin of the world, does not contradict the intervention of the divine creator but, rather, requires it.”

This is because “creation changes everything.”By this statement I mean, if we assume that our world is truly a creation and that the God portrayed in Genesis is real, then one’s worldview is never really the same and I emphasize even if you believe in evolution. By creator, I do not merely mean “maker.” One could believe God made the universe and then acted very much like the ancient Greeks thought he should: Go away. But Creator God of Genesis doesn’t go away. Instead he builds a temple of the world and places his own image inside human beings. That is the picture that changes everything.

Without a creator, one option is materialism which all the cool kids are calling “physicalism” even though spell check hasn’t accepted it yet. If that’s the assumption then many many of the things Christians warn against become quite reasonable. Why wouldn’t you accept gay marriage, polyamory (plural marriages between several adults) etc? There is no original dirt. There is just our construction of society fluid and ambivalent but for the all important consent. As goes marriage so goes sex, and babies, and charity. Provided we all acknowledge the dike of consent “do no harm” to each other, then as occultist Alister Crowley said, “Do What thou Wilt shall be the whole of the law.” Interestingly works out the same if you take option two: Pantheism. God could be nothing or God could be everything. Still there is no law giver. No one to be beholden to. We are subject to karma the same way we are subject to gravity. This doesn’t necessarily mean there wouldn’t be moral laws in this sort of universe like “take care of the poor” it just means there would be no moral authority–no consequences except the withering sneer of the New York Times editorial page.

But if there is a creator who is radically present in his creation going so far as to have humans bear his image, well now that’s something entirely different. Several ideas follow from the Judeo-Christian idea of God as creator:

1) Authority: You are creation not creator

2) Morality: It is wrong to worship creation (including yourself) instead of creator

3) Purpose: Creation has a purpose for which it is striving

Every controversial issue that evangelicals are at odds with secular society over can be traced back to the concept of creator and creation and it doesn’t really matter if one is a young-earth, old-earth, theistic evolutionist, or anywhere in between. These are important distinctions and the debate over them is very important but as long as God creates the world and we bear his image, the same confrontation with the secular worldview will be inevitable. The stumbling block is a creator God who makes human beings image bearers of his divine person. Marriage is sacred because of its symbolism of God’s purpose and because it is a way to redeem his creation from the fall. Sex is sacred because of its relation to the way creatures are supposed to act out God’s relationship to us. Unborn babies are sacred because bearing the image of God does not depend on stage of development just which species.

We can sum it up in the great Christology of Colossians 1: 15-17