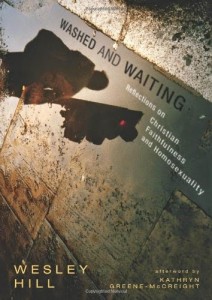 Last week I took up John Pavlovitz’s challenge to formulate what I would say to my children if one of them told me he or she was gay. That particular letter was aimed at a young adult who came out to me. This time, I want to formulate what I would say if a younger child–say 14 or 15–or even younger told me that they were attracted to someone of the same sex. The “letter” is a contrivance because obviously I would not “write them a letter.” I would sit down with them and talk.

So you’ve told me that you think you might be gay. You think this because you don’t find yourself really attracted to the opposite sex but find yourself very much attracted to the same sex. Chances are, I’ve suspected this for some time. Maybe you are like one of my heroes Wesley Hill who has tried to “like” those of the same sex but just can’t. In his book Washed and Waiting: Reflections on Christian Faithfulness and Homosexuality describes trying to feel attracted to girls all his life to no avail. That may be you. You may have had same sex attraction for a long time and just been too scared to say anything. So you want dad’s thoughts on all this:

I am so proud of you. No really I’m ecstatic that you had the courage to come to me and talk about this. It means I didn’t alienate you with my temper and my demands when you were younger. I am so proud of you for telling someone. Like as not, there are probably some people you know who going through a private hell right now wrestling with this very same issue.

You are not alone. Got that? There are Christians, evangelicals like us, who are wondering about the same things you are. Some are pastors and theologians like Wesley Hill and Christopher Yuan. I will do my best to put you in touch with some of them.

You are probably wondering two things, 1) is there something wrong with me?  2) will I get better?

The answer to the first question is Yes there is something wrong with you. You are a human being. So am I. There is nothing wrong with you that isn’t wrong with me. We are both “human and hungry in a fallen world of wonders.” to use Barbara Taylor’s phrase. From the time we are born we find ourselves with desires and sometimes they are so intense that we think our world will go crazy unless we indulge in them. For me its pornography. For you its your desire for the same sex. Now I know people will tell you its illicit to to compare the two. (But I bet you dollars to donuts the folks who decry that comparison are more than likely to really think there is nothing wrong with either of them.) Our struggle is not to be a slave to our passions. Any of them. I would say the same to you if you told me you were struggling for lust with the opposite sex. It is every man and woman’s battle to tame our desires and bring them under the lordship of Christ. See this really isn’t about sex as much as it is about desire.

I used to think that when I got married I would cease to lust after pictures of people having sex. I thought on my honeymoon. Okay now I can unleash my lust in a healthy way. I can finally make my wife the object of my desire. I was so wrong. The thing about lust is that its a disordered desire whether its for your spouse, your co-worker, or the person you sit across from the bus. Married intimacy doesn’t take away lust. Lust always wants more. Lust always wants what new or different. Lust says I want what I want. That doesn’t change with a wedding ring. We don’t see being “human and hungry.”

The answer to the question: Will you get better? Well that depends on what you mean by better. Will you stop feeling the way you do? I don’t know. Will you be able to master your desires and follow Christ? You can if you want to. It is possible. People are doing it.

Our desires are like unruly horses. Philosophers for thousands of years have been trying to figure out a way to tame them. Plato thought our reason could tame our appetites. Aristotle thought persistent habit would do it but he said very very little about sexual appetite. And here’s something you may not know: The early church struggled with this as well.  1 Corinthians 6:9-10

Do not be deceived: Neither the sexually immoral nor idolaters nor adulterers nor men who have sex with men nor thieves nor the greedy nor drunkards nor slanderers nor swindlers will inherit the kingdom of God.

Now I know you’ll hear those verses quoted a lot when the subject of homosexuality comes up. But look what it says in context. The next verse is so full of hope.

And that is what some of you were. But you were washed, you were sanctified, you were justified in the name of the Lord Jesus Christ and by the Spirit of our God.

See, same sex attraction right there in the church. Wesley Hill considers v. 11 to be such a hope:

As I look back over the course of my life, I regret the nights I have given in to temptations to lust that pulsed like hot, itching sores in my mind. And so I cling to this image–washed. I am washed, sanctified, justified through the work of Jesus Christ and the Holy Spirit.

Here’s the thing my child, because we are followers of Jesus we are radically different. If there is nothing else I can tell you its this. We are set apart. We don’t do things they way the rest of the world does it. We don’t look at ANYTHING the same way other religions or those who don’t believe in our God at all. When we are baptized into Christ everything about us is baptized into Christ–our identity, our values, our perspective and our sexuality. If you follow the path of Christ in your sex life which expresses itself in either marriage or celibacy you will be a puzzling, pitied, and likely ridiculed by gay and straight people alike. And likely some of that ridicule will take the form, “But why would you deny yourself the chance to be happy.” The reason Christianity is light years apart from the rest of the world is because of its definition of happiness.

So here’s where I’ll tell you that you will not be alone. I will be right there beside you as you sort all of this out and so will many other Christians. It maybe that you aren’t gay. It may be that you are. The point is that you are a Christian. I’m way more concerned about your discipleship than your desires. That means you face the same struggles any one of us does and you have the same responsibilities. How do we deny ourselves and take up the cross and follow Jesus wherever he leads?