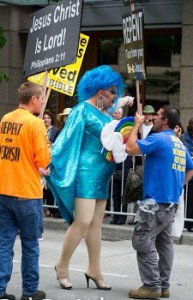 I’ve been staring at this photo a lot over the last few days. And the same thing keeps going through my head. What do these people think they are accomplishing? I mean the ones with the signs not the one with blue hair. I mean seriously what do you expect to happen when you show up at a gay pride parade with signs that say “Repent” and “Jesus Christ is Lord”  Do they think that drag queens are simply going to look up and say in a moment of clarity: “Wow. I am compelled by the sincerity of those people and their signs. I had forgotten that my cross dressing and gay sex was a sin. But seeing these signs, well now I’m not so sure. In fact, it just hit me that my entire worldview is completely false. And these people look so loving and caring. I really should rethink my entire worldview and maybe go to church with them.”

Is there anyone who seriously thinks that there are people in the gay community that are not aware that Evangelicals think homosexuality is a sin? This is not Paul at the Areopagus in Athens (Acts 17). This isn’t even Paul in Ephesus (Acts 19). Try as I might, I can’t think of any New Testament corollary to this sort of confrontation. Maybe that’s because if 1st century Christians had interrupted a festival parade either sacred or secular, they would have been immediately staring at the business end of Rome’s spear instead of the stuffed bra of a blue haired drag queen. But we do have to figure out a way to be Christian in a world that (thankfully) allows free speech from both drag queens and sign toting Christians. In the spirit of charity, I thought about what could have been written on those signs that would make me feel differently. And again, I can’t really think of any bible verse or message that would melt the heart of that drag queen who needs what Jesus offers so freely. The entire method just doesn’t wear Jesus very well. Somebody did find a way to say something on a sign that did do something other than create a row: 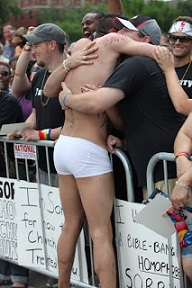 These people are hugging a gay man in his underwear at the Chicago gay pride parade. They are from the Marin foundation which is a non-profit that seeks to bridge the gap between the gay community and Christians. They came to the gay pride parade to apologize for how people like Fred Phelps and the Westboro Baptist Church have treated gay people. I cropped this picture because well, the young man is in his underwear but what you can’t see are the t-shirts that say I’m sorry and the signs that say “I used to be a bible-thumping homophobe and I’m sorry.” This young man later met with the guy hugging him and they’ve become friends. Dialogue continues. The Marin foundation is kind of an unknown quantity for me. Its not a church and it employs gay people who are married and those who are single and celibate. It is evasive on the major questions about the Bible and Homosexuality. They defend their ambiguity by pointing out that Jesus rarely gave yes or no answers to some questions until his crucifixion. I’m not sure what they are but they are trying to start a dialogue.

Some in the gay community don’t know what to do with the Marin foundation either. Many were touched by their no strings attached apology and their candor and humility. But others think an apology without acknowledging that there is nothing wrong with homosexuality is no apology at all. Here’s the self-proclaimed “friendly atheist” a guest contributor at Patheos.net

It’s a nice start. I applaud their intentions. It’s better than what most Christians have done, which is to demonize homosexuality and treat it like some sort of disease. But these signs have an implicit message: We’ve done a bad job of loving the sinner, but we still believe homosexuality is a sin. If these Christians still believe that, do their apologies really hold much weight with the gay community?I would take the Marin Foundation members much more seriously if they held signs that read like this:

I’m sorry that I ever believed homosexuality was immoral. I was wrong.

I’m sorry Christians are to blame for you not being allowed to legally marry. We were wrong.

I’m sorry I ever believed being gay was a choice. I was wrong.

It saddens me that nothing but full throated celebration will mean anything to this friendly atheist. As if people have to apologize for everything the offended party thinks they did wrong or it means nothing. Who thinks like that. On another blog, the debate about the Marins between members of the GLBT folks about how to take this sort of ministry reaches sometimes a fever pitch. Some willing to lay down arms and dialogue and for a vocal group tolerance is simply not enough. That is not surprising given the allergy to moral conversation in world that has a Christian hangover. How oh how do we wear Jesus well? In the MCOI journal article “Emergent Detergent” Don Veinot has talked about the difference between how we pastor and discipline within the Church and how we evangelize those outside of it.

We are not to pronounce judgment on those outside the church—that is God’s domain alone. Rather, we are to live as representatives (ambassadors) of the Redeemer and Reconciler and proclaim not a message of hate, but one of hope.

The issue, the essence of this fight, is not over sex or even marriage. This is not about a lifestyle or even a choice. The “friendly atheist” is clear if Christians had zero legal power and tolerated everyone, it still wouldn’t be enough. The problem is that they have a different worldview not a lifestyle. Its a worldview with a different picture of God, Jesus, and cosmic authority.  As I have said before we are dealing with Moral Strangers. Strangers who are no more or less rebellious than atheists, power-hungry politicians, racist law enforcement officers, porn stars, or ,you know, you and me. Especially me.  We all want to be god in our own lives. We all fall short of the glory of God and when we do we tend to become people who flaunt or celebrate that which we have been told is wrong.

So how do we love those who are moral strangers? It will take sacrifice. It starts with self-examination through prayer. Corporate prayer. Maybe we ask what happened in our church life that would make us think that the best way to wear Jesus was by reminding people what they already know: we hate their sin. They know we hate the sin. We’ve communicated that in spades. They haven’t forgotten. However, when did we start to think that was the only element of the Gospel? When did we become so entrenched as to think this sin should be singled out?  Maybe our full-throated denunciation is really about the fact that the world seeks to marginalize us. We hold up signs to say, “See we’re still here. We don’t care that you don’t like us. We will speak up.” I understand that sentiment. I even feel the urge to say, “Yeah. You can’t silence us.” But then I realize that I might need to take that attitude to the cross because my calling is not to make my voice heard. My calling is to make the Gospel heard. Second it will take sacrifice to reach out to people radically different than us and love them fiercely and insanely. Readers of this blog have the paradigm for this. How do we treat Jehovah’s Witnesses and Mormons? Do we simply remind them they are sinners and going to hell? Do we confront Jehovah’s witnesses with signs that say “Jesus is not an Archangel. Repent!” and expect them to change their mind? Or do we get to know them and invest time in them and provide safe places for them. And when we have done that first, then we win the right to share the gospel. What would happen if we treated gay people like we treat those we have deeply profound theological disagreements? If we can figure that out, we can start to wear Jesus well.