Why is Sex is the Canary in the Coal Mine? 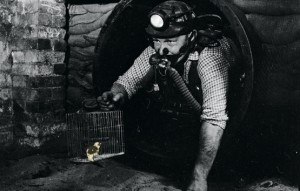 If you are not familiar, dear reader, the term “Canary in a coal mine” is an expression rooted in history. Coal miners would bring a canary down into the coal mine to detect dangerous levels of carbon monoxide or methane. The deadly gases would kill the canary before it would kill the miners, giving the humans time to retreat. Modern coal miners don’t use canaries much anymore. These days, to be a canary in a coal mine is to serve as a detector of something dangerous that is often unseen until it has done its damage. It is often an overused metaphor in the ongoing circus that is financial forecasting:

“I tend to look at financial markets as being the canary in the coal mine,” Fed Governor Frederic Mishkin said in a discussion about inflation, adding that “the canary has not keeled over.” “I don’t think the canary is wheezing,” New York Fed President Timothy Geithner chipped in. Fed Chairman Ben Bernanke had the final word: “I think the canary is still getting decent breath here.”

So why is one’s attitude about sex the indicator of whether you are a traditional Christian or a progressive Christian?

I’ve been thinking about this way too much. Not sex itself but “sexual attitudes” and why they are so polarizing. Let me define my terms: by “sexual attitudes” I  mean your attitude toward pre-marital sex, homosexuality, same-sex marriage, contraception, etc. Mark Driscoll summed most of this up in his book, Real Marriage in a chapter called “Can We . . . ” except one might restate it as, “Can I . . . ” and still be consistent with traditional Christianity. Can a Christian approve of same-sex marriage and still be a bible-believing Christian? Can I be indifferent about pre-marital sex and still hold to the Bible as my moral guide?

Rod Dreher at the American Conservative puts it this way:

Please don’t misunderstand me. I’m not saying traditional Christianity is all about sex or even primarily about sex. I mean that one’s attitude about sex is a very very accurate indicator about where you stand on traditional Christian views about the Bible, the Church, and the mission of the Church. I actually think Christians should take a cue from Pope Benedict who, N.T. Wright reports, kept talking about Jesus as the media kept trying to get him to talk about sex. Also don’t misunderstand this as a justification for or against political action. The question of whether or not the state should get involved in preserving a particular moral order depends on a lot more than whether or not one accepts Christian sexual theology. I think my own views on when and how to use the power of the state has foisted upon you, dear reader, enough.

My concern is that Christians understand what the divide is, why it is such a divide, and (because sexual attitude and not belief in God or economics is what divides the in-crowd and the bigoted/hillbilly/hatemongers) prepare ourselves for increasing marginalization and ever increasing legislative encroachment. We need to think about how to turn the objection and insult about our sexual attitudes to discussion about Jesus. This encroachment will not be spun as political revenge for past conservative legislative morality but, by in large, it will be.  Frankly, I honestly believe there will come a time when churches who refuse to do same-sex weddings  in their church will have to perform secret marriage ceremonies as St. Valentine did. If you want a close approximation of what I see as our future society read the novel The Night Sessions by Ken McLeod.

Attitudes about Sex are intensely personal unless you are a Christian. What made the whole Hobby Lobby debate so interesting is the way it pitted sexual liberty against religious liberty and its pretty clear that in the public square sexual liberty wins every time. However there has been a dramatic drift from “stay out of my bedroom” to “these choices are personal. They are so personal we need to talk about them, advocate for them, shame those who disagree, and above all celebrate publicly these individual decisions.” However, if you are  Christian, sexual decisions are not merely personal. They are not merely cultural. They are cosmological. I’ve written about Sarah Ruden’s Paul Among the People. Rod Dreher, paraphrases Ruden on just what marriage meant to Christians:

Paul’s teachings on sexual purity and marriage were adopted as liberating in the pornographic, sexually exploitive Greco-Roman culture of the time—exploitive especially of slaves and women, whose value to pagan males lay chiefly in their ability to produce children and provide sexual pleasure. Christianity, as articulated by Paul, worked a cultural revolution, restraining and channeling male eros, elevating the status of both women and of the human body, and infusing marriage—and marital sexuality—with love. Christian marriage, Ruden writes, was “as different from anything before or since as the command to turn the other cheek.” The point is not that Christianity was only, or primarily, about redefining and revaluing sexuality, but that within a Christian anthropology sex takes on a new and different meaning, one that mandated a radical change of behavior and cultural norms.

many of the changes ushered in by the “sexual revolution” are right and good, it’s so new that the dust is only beginning to settle on whether we overshot the all-things-considered optimal set of sexual norms, and what implications that will have. Notice in the abstract, though, that when there are (rightfully) fewer laws constraining sex, we need more informally-enforced social norms to guide people in this important domain of life, not fewer. A free society can allow for things like porn, prostitution, and polyamory without normalizing them. The resulting socio-political situation is essentially just as “free” for those who want to partake, but generates much less of a pernicious sexual mire for those who are meaningfully unable to navigate it successfully.

In other words, one’s sexual attitude is social in some very deep respects. The horror. One response to her post called her suggestion, a low calorie version of religious morality. A young, ostensibly non-religious libertarian is actually accused of being a stodgy religious conservative for the mere suggestion that there could be problems with the sexual revolution:

To put a finer point on it, I think you’re so far out of touch with contemporary society that Young Voices is likely much better off without you. I hope you find somewhere else where you can implore the casual daters out there to get off your lawn and turn down that music.

If the mere questioning of the sexual revolution is enough to get a 20 something libertarian tarred with a 1950s curmudgeon stereo-type, whoah boy what are they going to do with Christians who insist that God has a wonderful plan for your sex life but you might not like it. But more importantly we do all of this because attitudes about sex, marriage, gender etc is not just a social construct but aim at a metaphysical claim about reality. The real dividing line is whether there is any authority at all. Once you admit God is creator in the biblical sense, it changes everything. There is a purpose for human existence. There is a pattern to human happiness for individuals and society as a whole. And if the Bible is some sort of authority then what it says matters. I can’t simply construct my sexual attitude based on my experiences or the wonderful gay people I know. Yes the Bible talks about slavery as well as sex. However there is a real difference: Slavery isn’t indicative of creation and thus it isn’t necessary for Christianity. That’s why most abolitionists were Christian. But sex and marriage are indicative of creation. Marriage and sexual union is the singular metaphor for Christ and his relationship with his people. That’s not personal its theological and it will always, always separate those who accept the Christian God’s authority and those who don’t.