Our Burn Out Youth Group 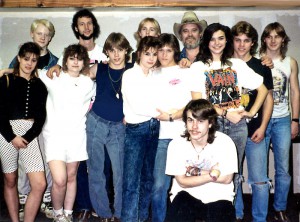 I recall years ago watching former pro football player, Rosey Grier on the Mike Douglas Show. Two things got my attention. The first was, this big, tough football player was knitting while they talked. Douglas asked if anyone made fun of him and with a gentle smile Rosey asked, “Would you?” I laughed. The other was a comment he made quoting from someone else whose name I do not remember. He said that five years from now you will be the same person you are today expect for the books you read and the people you meet. Interesting … and true.

Life often tends to lead in unanticipated directions. Not always ones you would have chosen to be sure and sometimes fraught with difficulty. We may meet and interact with people in ways that we would never have planned and are changed by the experience. Joy and I are involved in a mission to cults and false religious movements because she met some women who were Jehovah’s Witnesses and she began to care deeply about them. It is a mission that by definition has to happen outside the church. Jehovah’s Witnesses view the church as evil and so reaching out to them has to happen on more neutral ground which is where evangelism it supposed to happen anyway.

Joy is our family historian and archivist. She works on the genealogies of both of our families. I was surprised when she discovered my ancestors were French Huguenots who fled religious persecution and were some of the founding families of Lunenburg, Nova Scotia . She also has thousands of family photos dating back to near when the camera was first invented I think. Well over 10,000 and she works on them when she is able.

Recently, she was working on photos that dated to the time when my son, Lee, was a teenager. Without going into what might be embarrassing detail, I have to say, he tested our mettle as parents. In trying to figure out how to keep him from harming himself at least until he was old enough live on his own, we had to get creative. It occurred to us that Lee always traveled with 50 of his closest friends. Well, perhaps 50 is a bit of an exaggeration but he had an entourage. They definitely were not church kids. They were the area burnouts. Some from very dysfunctional families, others from caring families but who, like us, were not sure what to do with their erring progeny. It occurred to us that if we opened our home to his friends, he would be there. We had a shed in back which we told them they could use as a sort of clubhouse. There were 2 standing rules. No drugs and no alcohol and if I discovered either I would call the police.

We ended up having quite a collection of kids over the next few years and went through lots of frozen pizzas, cereal and milk! It was not uncommon to wake up in the morning to find several kids sleeping on our living room floor, often kids we had never seen before. Sometimes Lee or one of his friends would bring a run-away they had met to the house. They figured they didn’t know what to do but I would. I didn’t. The first time I called the police, the young lady didn’t want to go back home and the police explained the process we needed to follow. It meant I would have to invest several hours at the station with the teen while she, her family and a counselor tried to work things out. My son and I ended up being the counselor. Over time we had enough run-aways appear on our door step that the local authorities began calling to let me know that some area youth had run away from home and would I call when they arrived.

Several things surprised me about the group which seemed to take up residence. Some of the parents contacted us to meet to try to find out who we were. All they knew is that when asked where they were going their teen would just say, “The Veinot’s.” They knew their off-spring was in trouble and, like us, wanted them to be as safe as possible. We started a Bible study every Sunday night. None of these kids would have been caught in a church except for a wedding or funeral but nearly all showed up every Sunday night. As we would go verse by verse we dealt with a lot of questions of life. They were not shy in asking questions and the exchanges would sometimes get lively. I remember sitting on our porch swing debating with James the atheist about the existence of God. Others participated. It was not uncommon for the girls to go in and talk with Joy about their boyfriends and try to figure out relationships. The guys? Well, they came to me to try to figure out females. I suggested they give up on that quest:D

This mission field that we had become part of took on a life of its own and we really came to care for this ragtag bunch. We decided to take them on a retreat but where could we go? I contacted Camp Honey Rock in Wisconsin and explained what we were up to. They made arrangements for us to bring the group and even set up a smoking area away from the “church kids” who seemed incensed that these burnouts, a label they seemed to proudly wear, were there. We not only had fun but spent a great deal of time on issues of faith. 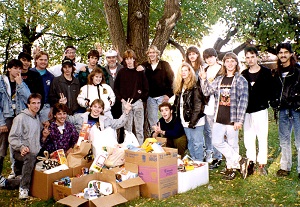 I will never forget the time this group decided to help get food into the area food pantry which was running low. The group showed up one morning and off they went carrying cards with our phone number in case anyone wanted to confirm that this was legitimate. After all, the group wasn’t really “churchie” looking. The calls I did receive were from Christians demanding to know why we didn’t make them clean themselves up, get their hair cut and look more presentable before letting them go to people’s homes collecting food. Me, I was just glad to see the kids concerned for the plight of the poor and hungry. I have to admit, sometimes I forgot they weren’t the clean cut All American types:D

Here we are years later. They are now adults. Most of them married. Some with children even teens of their own. Many of them are Christians. James the atheist is a Christian and a while back moved into our area for his work and has started attending our home church. At least two from that group are pastors. Pastors…hmmm. Rosey was right. Joy and I are changed from our time with these people that God brought into our lives and they are changed by having met us and more importantly Jesus.Ω

© 2014, Midwest Christian Outreach, Inc All rights reserved. Excerpts and links may be used if full and clear credit is given with specific direction to the original content.