Reflections on Bill Gothard and the Church in Singapore

The things I appreciated most about the pastors and Board of S-Word Evangelical Free Church in Singapore is their passion for God and their zeal to guard and shepherd the flock. They meet in 3 suites on one of the upper floors of a light industrial building in Singapore. 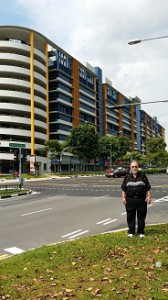 It was refreshing to see the unity of the Senior Pastor Dr. Daniel Chua Yew Ming and the associate pastors, Pastor Lui Meng Hong, Pastor Samuel Poon and Pastor Jervin Lim. I did not get to know the other pastoral staff and Board as well but the unity amongst them was clear and seemed to permeate the congregation. Of course, they had asked me to come to address an area of tension that was developing due to the teachings of Bill Gothard and IBLP. I have to say, in the short time I have known them, I have come to love these four men of God. Pastor Daniel is gentle, leads by example and doesn’t micro manage. Pastor Lui is unassuming and very concerned about accuracy. He was the translator for each of my talks and spent a great deal of time poring over the PowerPoint presentations to make sure he understood what I would be saying and asked questions on certain words because he would have to explain the concepts where words in Mandarin were not available. He was impressive. I spent the most time with Pastor Samuel and Pastor Jervin as they took me sightseeing on the island. What a great sense of humor they have and Pastor Samuel did an excellent job of being the trip photographer. Joy and I will have a hard time choosing which of the several hundred photo and nearly 40 videos he took to share. But overriding all of the camaraderie the serious task of the Apostle’s charge to the Ephesian Elders was at the forefront and in the center of our thoughts and discussions:

Pay careful attention to yourselves and to all the flock, in which the Holy Spirit has made you overseers, to care for the church of God, which he obtained with his own blood. I know that after my departure fierce wolves will come in among you, not sparing the flock; and from among your own selves will arise men speaking twisted things, to draw away the disciples after them. Therefore be alert… (Acts 20:28-31a)

A tension had been developing from loyalists to Bill Gothard’s teachings. Over the years of trying to bring Bill Gothard to correct his teachings we (MCOI) have watched churches split over Gothard and it is not a pretty sight. In some cases it comes about by pastors who become authoritarian and use Gothard’s teachings to squelch questions and dissent. In other cases it comes from Gothard loyalists who insist that the church must adopt and teach the “non-optional” principles and other teachings from IBLP. Pastor Jervin contacted us in 2011 in search of answers and the pastoral team has carefully and diligently done their research, spent time working with the Gothard families and the church has taken their positions based on a biblical examination of IBLP’s teachings. Their most recent position was to discourage their members from attending or participating in any IBLP seminars or teachings. As I planned each teaching session I followed my standard methodology. I would not have enough time to tackle each teaching and issue and so chose a few important areas of concern (authority, grace, circumcision, misuse of Scripture) and followed the theme of context and definitions. My standard teaching approach is to attempt to give tools which can be used in most settings in addressing a variety of topics and questions. I then used the IBLP teachings in question as a way to demonstrate how these 2 tools work. Context and definition surfaced not only in each session but even when we would go out to eat.

The pastors took me to some outdoor food courts which the locals tend to frequent instead of restaurants and would purchase a variety of foods they wanted me to try such as an Indian Dish called Roti Prata which is a sort of pancake either plain or filled with fruit. (The banana was great!)

On Monday morning Pastor Jervin and Pastor Samuel picked me up at the hotel for a day or sightseeing and adventure. The first stop was, you guessed it, an outdoor food court. They brought several dishes and I asked the names before I tried them (I am really not a food experimenter). One which looked interesting was Chee Cheong Fun and I asked what the name meant. You will love this. It is Cantonese and the translation is Chee = pig, Cheong = intestine, Fun = flour. I was considering taking a pass but they Samuel smiled and said, “Context and definition are important,” and so it was. The word for word translation doesn’t give the whole picture. The context helps define how the words were being used when this particular dish was created. 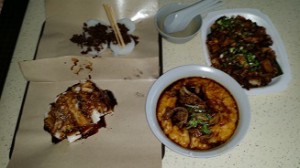 It is made of rice flour (Fun) and is a noodle which looked like a pig intestine before it is sliced up. So the context is what the product looks like while it is being made the name is not telling us what it is made of. The context and definition helped me make an informed decision and, ahhhhh, it was very good. (Chee Cheong Fun is in the bottom left corner of the photo.)

One of the young men, a first year law student, spent some time with me between sessions and said he thinks be may be called to be an apologist. He didn’t even know there was such a ministry but has a mind and passion in that direction already. I outlined some things he can do to start some training and test it out. The pastors have a new idea, vision or dream. After we finished and had time to talk about how things went they said they would like to pray about and consider partnering with 2-3 other churches and being me back with perhaps a couple of others to have teaching on other apologetic issues. This trip was every bit as much for me as it was for the church in Singapore. I was reminded how big and really transcultural the church is. But more than that, as my friend Bill Honsberger at Haven Ministries reminds me, God loves the church. He is right and like most of us, I sometimes get tunnel vision. Apologetics is a tool, the handmaiden of evangelism and discipleship. It is a means to an end and not the end itself. It is a way that we guard the flock from predators which would come in from the outside and from false teachers and teachings which rise up from within and our task as apologists and missionaries to New Religious Movements is to serve the church and make the pastors task easier not more difficult. Thank you S-Word Evangelical Free Church in Singapore. The Board, the pastors and the congregation. I loved seeing all of the youth and college folks there and completely engaged along with the adults.