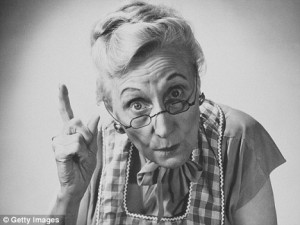 Last post I was worried about selfies. This week, dear reader, I’m worried about a trend I’m seeing in how our culture handles people they don’t like. Donald Sterling is the latest example, but I’m also thinking of Mozilla CEO Brendan Eich who was forced to resign because he opposed Same Sex Marriage by giving a 1,000 donation to Proposition 8 in California. To be clear no one’s rights to free speech were violated. This is not a rant about the first amendment at all. Rather this is a rant about the new outrage that Kareem Abdul-Jabbar referred to as the “finger-wagging olympics.” in reference to the Donald Sterling debacle. It’s also what philosopher and statesman John Stewart Mill called the “social tyranny.”

[Society] practises a social tyranny more formidable than many kinds of political oppression, since, though not usually upheld by such extreme penalties, it leaves fewer means of escape, penetrating much more deeply into the details of life, and enslaving the soul itself.

Brendan Eich, inventor of javascript and CEO of Mozilla, made a donation. Presumably he supported Prop 8’s ban on same sex marriage. Employees of Mozilla took to the twittersphere

to complain and eventually the electronic chant grew louder and louder, “Eich should resign.”  I don’t know why Eich opposed gay marriage and likely neither will any of the twitterocracy because I doubt he’ll say much in public ever again. And that is what has me worried. I’m worried that a society that is short on rationality and brimming with rage will simply tweet certain ideas into silence. And I’m worried those ideas themselves won’t necessarily be evil. And even if they are evil, I’m worried that we will have no room for restoration. I say harsh things on this blog all the time about people in the public eye. However, I rarely call for those people to simply be drummed out of society without any life line back to the rest of us.

It is a very serious thing for an individual or even a mob to call for someone else to step down from a position and it ought to be because of more than we don’t like their views.  A boycott is not the same thing as free speech. I worry that our society is transforming from apathy about bad ideas to an equally dangerous alternative–making those we disagree with persona non grata. This is a technical term in diplomacy. It means someone is no longer welcome in a particular country. You have to do some serious stuff to get labeled persona non grata. However, in its non-technical sense it means something like what Wikipedia says:

In non-diplomatic usage, referring to someone as persona non grata is to say that he or she is ostracized. Such a person is for all intents and purposes culturally shunned, so as to be figuratively nonexistent.

That’s what I worry about. I worry that there will be ideas one cannot hold in public because as Ravi Zacharias said, this generation listens with its eyes and thinks with its feelings. Consider this op-ed from the illustrious Harvard Crimson:

If our university community opposes racism, sexism, and heterosexism, why should we put up with research that counters our goals simply in the name of “academic freedom”? Instead, I would like to propose a more rigorous standard: one of “academic justice.” When an academic community observes research promoting or justifying oppression, it should ensure that this research does not continue. The power to enforce academic justice comes from students, faculty, and workers organizing together to make our universities look as we want them to do.

Let that sink in, dear reader.

The power to enforce academic justice comes from students, faculty, and workers organizing together to make our universities look as we want them to do.

That this student doesn’t realize that the one who wields the sword of academic justice is likely to be on the receiving end some day, is naive.That a student at a liberal arts university can write that without pause is cause to worry about the graduating class of 2015. This same student called for academic justice to be administered to a professor whose book she deemed oppressive to women. She wanted him fired for his ideas not his character. I get that the NBA owners have an interest in preventing a boycott of the Clippers. After all, a boycott would affect their team as well. However what happened to Eich and what may happen to the aforementioned Harvard professor seems more chilling because people wanted to deprive them of their livelihood because they were repulsed by their allegiances and their ideas.   And like Mill said, this kind of social tyranny leaves no real escape from Twitter or Facebook.
Simply put, we are children playing with chainsaws. There was a time when a groundswell of popular support required equal parts passion and legitimacy to really “go viral.” Now, all you need is a cell phone and a catchy hashtag. As Stephen Colbert found out: 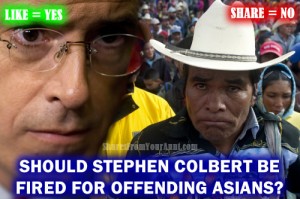 Things are really bad when the proponents of gay marriage have to take to the blogosphere to tell their supporters that it is not cool to fire someone for their anti-gay beliefs. Jonathan Rausch, a staunch gay activist, did just that in a piece called “Opposing Gay Marriage Does Not Make You a Crypto-Racist”–a title that should be an exercise in stating the obvious but sadly isn’t. Many of the activists that have fought for Gay Marriage recently signed a statement called “Freedom to Marry, Freedom to Dissent: Why We Must Have Both” Here’s an important excerpt:

The last few years have brought an astonishing moral and political transformation in the American debate over same-sex marriage and gay equality. This has been a triumph not only for LGBT Americans but for the American idea. But the breakthrough has brought with it rapidly rising expectations among some supporters of gay marriage that the debate should now be over. As one advocate recently put it, “It would be enough for me if those people who are so ignorant or intransigent as to still be anti-gay in 2014 would simply shut up.” The signatories of this statement are grateful to our friends and allies for their enthusiasm. But we are concerned that recent events, including the resignation of the CEO of Mozilla under pressure because of an anti-same-sex- marriage donation he made in 2008, signal an eagerness by some supporters of same-sex marriage to punish rather than to criticize or to persuade those who disagree. We reject that deeply illiberal impulse, which is both wrong in principle and poor as politics.

The signatories of the document highlight the irony of pro-gay marriage activists calling for the discrimination of those they blame for discriminating against gay people in the first place. It is a dangerous precedent and I commend the signatories for thinking with more than their feelings. In fact if I were a minority in a society, these signatories are, by in large, the character of people I would like to be in the majority.
Mill was worried that practicing social tyranny could be far worse than government sanctioned tyranny because it left no where to run. Let me end with a specifically Christian thought: social tyranny leaves no room for reconciliation. The ministry that Paul was so adamant is our birthright and our duty. 2 Corinthians 5: 19-20

. . . God was in Christ reconciling the world to Himself, not counting their trespasses against them, and He has committed to us the word of reconciliation Therefore, we are ambassadors for Christ as though God were making an appeal through us; we beg you on behalf of Christ, be reconciled to God.

No one is ever  really persona non grata for us. A testimony to that is the many many times Midwest Christian Outreach has tried to meet with and persuade people like Bill Gothard. This has not always been successful but it has always been the goal. MCO’s model verse has always been “So have I now become your enemy because I tell you the truth?” We are commanded to tell the truth but to tell it for reconciliation No one–not racists, not pederasts, not sadists–no one is without a lifeline. I leave you with the words of my favorite band The Lost Dogs: