The Selfish Selfies of Self-Aggrandizement

I’m worried about selfies, dear reader. I became worried about selfies when I realized I had begun posting my own. There I was about to sit down to a round of grading student essays. I chuckled because I was using one of my favorite geek toys, the Darth Vader pen. Before I knew it I had taken a picture of my pen with my phone (no small feat of one-handed dexterity, let me tell you) and posted it on Facebook. Here it is: 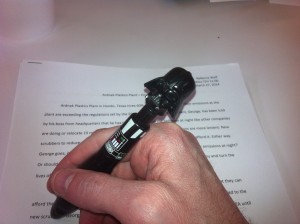 There it is again. Just when I posted this to the Crux I felt the Chris Matthews tingle down my leg. Why? Because ain’t I cool? I have this pen. You know how I know I’m cool because something like 15 people “liked” my picture on Facebook. Some even made witty comments. This more than makes up for all the ridicule and ostracizing I received in high school by the cool kids. I checked just the other day. Some of those cool kids I still follow on Facebook. We’re not friends but we are “Facebook” friends. And you know what? They didn’t get as many “likes” for their inane photo of their cat or the party last weekend as I did for my ultra-cool Star Wars pen. That sound you hear is my tiny ego inflating like a blow fish.

Why am I worried about selfies?

Young women take selfies because they don’t derive their sense of worth from themselves, they rely on others to bestow their self-worth on them — just as they’ve been taught. From the time they’re itty bitty, little girls are bombarded with images of idealized female forms. They’re indoctrinated with Victoria’s Secret-style cartoonishly unobtainable passive Sexiness® and told that this is what they should Be When They Grow Up. They’re being sold “flirty” child-sized Halloween costumes modeled after “sexy” adult costumes. They’re told that they’re at their best when they’re at their most decorative.

[Selfies] a reflection of the warped way we teach girls to see themselves as decorative. The post-approval-post cycle continues as people become accustomed to immediate e-validation. Which came first: the selfie or feeling like [expletive] because someone said something mean about your face on the internet?

Every selfie is not a cry for help. Every selfie is not a further slide into the abyss. But the habit of selfies or instagramming everything, I worry, is a substitute for something and I’ll be uncool enough to say it. Instant e-validation is the worry. I worry that we are creating a habit of self-aggrandizement at 4G speed.  Need a boost? Need to feel cool? post some clever thought or picture. Instantly receive validation: “You are cool” or “hot” or “Hip” and suddenly we are all Sally Field at the Oscars.

Here’s the spiritual truth: What you do becomes who you are. Actions produce habits. Habits produce character and character produces culture. The writer at Jezebel is worried that selfies are making women concentrate on the wrong parts of themselves (their looks) but as a Christian, I’m worried about the “self” in the selfie. I’m worried about my desire for e-validation and what that looks like when it bears fruit in my character. Please, don’t misunderstand me dear reader, this is not a crusade or a call to any specific action. Its rather, a caution light. A call to be mindful of how we are absorbing culture.

Facebook is the public square now. I can no more retreat from the public square than I can stop praying. I post to Facebook for lots of reasons. I post to catch up. I post to provoke thought. I post to empathize. But how much of my posting is simply “Look at me” or “Aren’t my kids cool?” (After all, we can post family versions of the selfie as well! Recently my wife and I were talking about how pride gets into our lives. She voiced a worry about herself that I had as well, I was just too cool to admit it: We get a thrill when other people are jealous of our marriage. We both get that tingle when someone says, “I wish my husband/wife was like that.” Leave it to our sinful nature to make a vice out of the virtue of marital bliss.

Oh how different is our calling, dear reader:

“In your relationships with one another, have the same mindset as Christ Jesus:

Who, being in very natureGod,
did not consider equality with God something to be used to his own advantage;
rather, he made himself nothing
by taking the very natureof a servant,
being made in human likeness.
And being found in appearance as a man,
he humbled himself
by becoming obedient to death—
even death on a cross!”

Paul reminds us there is a new way to be human. The way to gain our lives is to lose them for the sake of the gospel.