Can Anything Good Come Out of Louisiana? 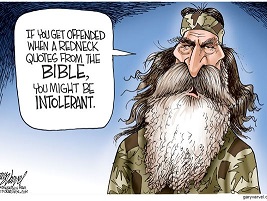 You would really have to be a near hermit to have not heard about the flap caused by the “Duck Commander” Phil Robertson and the media apoplexy which has resulted. Comedian Jeff Foxworthy made the phrase, “You might be a Redneck if…’ very popular and IndyStar Cartoonist Gary Varvel picked up on the theme in his opinion cartoon Phil Robertson and intolerance. Varvel has really encapsulated the issue.

At first blush it stretches credulity to think that anyone would be shocked that a religious conservative would quote from the Bible and create such a quick backlash from those who claim to be tolerant and inclusive. That is until we realize how far the nation and even some or perhaps many churches have strayed from the Bible. I really liked Amy K. Hall’s piece “The Bible Is Offensive”.

Maybe we in the West were so steeped in Christianity for so long that its words ceased to be shocking and became merely familiar words. However it happened, somewhere along the way we forgot something very important: the Bible is offensive.”

Indeed, it is as Amy goes on to demonstrate from Scripture. As I listened to the media pundits, conservative and liberal, the discussion ranged from “what gives him the right to condemn and entire group of people?” to “A&E is infringing on his rights of free speech.” There were other claims but these were the big two. The second is very easy. There is no constitutional question here. A&E isn’t the Federal Government and there is no governmental infringement on his speech therefore this objection fails The first is also easy and really does build from the previous objection. Constitutionally all of us have the right to say what we think. It may not always be prudent but we do have the right.  However, there are potential consequences to our exercise of that right. In Robertson’s case, A&E chose to put him on hiatus while they decided what to do. It is abundantly clear from the GQ article that Robertson was giving his opinion with the words, “It seems like, to me …” Later in the article, the author, Drew Magary writes:

Then he paraphrases Corinthians: “Don’t be deceived. Neither the adulterers, the idolaters, the male prostitutes, the homosexual offenders, the greedy, the drunkards, the slanderers, the swindlers—they won’t inherit the kingdom of God. Don’t deceive yourself. It’s not right.”

Then he paraphrases Corinthians,”  imagine that! A Conservative Christian quoting from the Bible. Where will it all end I ask you?

So, we have two things going on here. First, he rendered an opinion that is in contradiction with the main stream media and liberal culture bysaying his sexual preference was for someone of the opposite gender and not the same gender. Second, he quoted from the Bible in of all places, someone who according to the article is a self admitted Bible thumper. Horrors. So, if A&E is thinking about exercising the morality clause in the contract, which of these was immoral? Having a non-liberal approved idea, sexual preference for the opposite rather than the highly protected same gender preference or quoting from the Bible? In all of the discussion about a theoretical morality clause I have yet to hear any of the pundits elucidate which or if it is both of these acts violated the morality clause. Or perhaps the moral lapse was jeopardizing A&E’s standing in the Liberal mainstream or perhaps potentially impeding their pursuit of the most holy, the almighty dollar. Perhaps that is it, I am not sure.

It has also been pointed out that he has stated that homosexuality leads to bestiality. He hasn’t but two things arise from this claim. First, in the article this immediately precedes his paraphrase of 1 Corinthians. He mentioned bestiality and he mentioned adultery right after that. His point was not that one leads to the other. Does anyone really think he was suggesting that homosexuality leads to bestiality which then leads to adultery? Not likely. But that raises another issue. Why would bestiality be wrong? If the modern day enlightened criteria is that anyone’s sexual preference is to be accommodated and normalized and not frowned upon why only same gender sexual preference, why not bestiality, or any other personal sexual preference? Wouldn’t it be discrimination and taking away someone’s equal rights simply becuase they prefer sex with animals instead of humans?

The second was on Friday, December 27 when A&E took Phil off of hiatus . It seems they really couldn’t let the cash cow go by letting Duck Dynasty go to a network which would be more tolerant of their views .

Third, Christians got a public voice. I don’t really care about Duck Dynasty and have never watched it but a pastor friend said it sort of reminded him of Philippians 1:14:

And most of the brothers, having become confident in the Lord by my imprisonment, are much more bold to speak the word without fear.

It will likely be short lived but Amy Hall may be on to something:

The Duck Dynasty controversy is a good indication that our culture has come out of Christianity far enough to start feeling the impact of its radical words once again, and that’s not a bad thing if it can cause people to reflect on three things: 1) I am a sinner, 2) God is a perfect Judge, and 3) I need a savior.

My question is, how many churches are willing to train their people to defend the faith in the public square and share the gospel where they meet non-believers?