What Do I Do With My Anger? 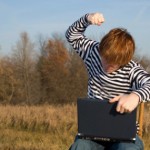 There are a number of what I call “stock questions” we regularly receive. “Which is the one true church?” is pretty high on that list. It comes from folks that were in a high demand group like the Jehovah’s Witnesses, Remnant Fellowship and others who claim to the sole organization or church God is using and all other churches are in rebellion. The denominational divisions are pointed to as “evidence” of their claims. Uniformity (all followers believing and agreeing 100% with the leadership) is substituted for unity (united on the essentials of the faith while practicing the faith differently from group to group). I explain the difference between relationship and organizational affiliation and suggest our article ”The Tie that Binds”.

Another is “If Jesus is God who was he praying to, himself and when he died did god die?” Most often this comes from JWs but there are others, who ask the same question. I talk through the issues and often send them our article, ”Answering JW Objections to the Deity of Christ” and perhaps ”Should You Believe in the Watchtower or Is Jesus Christ Almighty God?”.

These are more or less fact based questions and we can point to the answers fairly easily. Of course, that doesn’t mean the answers will be accepted and sometimes more clarification needs to be done and although emotions can get involved, the questions are questions of fact and can be factually answered.

Another question I receive and hear fairly often is “How to I handle this anger?” This one is different and is largely emotionally driven and emotions are not necessarily rational. It is often ignited and fed by a violation of our sense of fairness and rightness by a person, group or life situation which is or we perceive to be beyond our control. A rebellious teenager is viewed as a personal attack on us as a parent. Another employee gets a promotion which we believed was rightfully ours. The Federal Government intrudes more into our personal lives and while feigning belief in “choice” as long as it is a choice to dismember an infant in the womb, takes away choice in crucial issues like health insurance and health care. Destructive religious groups demand total unquestioned loyalty and punish any who exhibit independent thinking. Sometimes this means the loss of all friends and family for being “rebellious.”

Sometimes it is simpler. A computer program doesn’t work right and we lose endless hours trying to get it working. The car breaks down on the way to an important meeting or just some social thing we really don’t want to miss.

I have to admit, answering this question is one of the more difficult areas for me. I get angry that when the president said if we like our health insurance we can keep health insurance, period. I and others said at the time it wasn’t true. We were called racists for our position. While so many are being hurt by this, I am angry.

I get angry as I counsel a mother who, as a Jehovah’s Witness, helplessly watched her child die due to a lack of a blood transfusion. The cruelty and carnage as the result of false teaching does anger me.

Years ago, as a volunteer hospital chaplain, I went to meet with a woman whose husband had died in the ambulance on the way to the hospital. When I went to comfort her, in anger she told me to get away claiming God had lied to her. As it turned out, her husband had a very treatable form of cancer but they were followers on Kenneth Copeland who told them that if he took the treatments and medication he was “claiming the illness.” So, they abandoned the medical treatments and “claimed the healing.”

For many, there is a certain amount of guilt that may come about with or after getting angry, especially for Christians. There is a sort of unwritten rule that says niceness is the closest thing to godliness and being angry is not nice and therefor ungodly.

Sometimes, anger is wrong and can be counterproductive or even destructive. A driver accidently cutting us off in traffic wasn’t intentional or personal and road rage in attempting retribution for a perceived personal attack could result in a tragic accident.

The anger may be a correct reaction but wrongly directed. The woman whose husband died should have been angry at the false teacher who manipulated her and her husband resulting in his death.

Obviously I cannot give a comprehensive answer to the question of what to do with anger but a few pointers may be helpful.

First, sometimes anger is the proper reaction. We have examples of God being angry. Just a few are Number 16, 22, Deuteronomy 4. 1 Kings 11, 2 Chronicles 28 and others. So, being angry may not necessarily be sinful or result in sin. It may very well be the factor which moves us to correct or get involved with correcting an actual wrong.

Second, life is not fair. We live in a fallen world and when we come to believe or expect that life should be perfect, imperfection can seem to give us an excuse to be angry. Life isn’t fair and disappoints will come our way but God uses those to develop our character in some cases and in other cases to demonstrate to others how to handle adversity:

Consider it all joy, my brethren, when you encounter various trials, knowing that the testing of your faith produces endurance. And let endurance have its perfect result, so that you may be perfect and complete, lacking in nothing.

Third, I know this seems cliché ridden but James is right on this. But how do we accomplish considering trials Joy? How do we prevent anger from turning into rage and transforming us into the Hulk? In other words, as Paul writes in Ephesians 4:

Be angry, and yet do not sin; do not let the sun go down on your anger, and do not give the devil an opportunity.

In fact, the emotion of anger is ineveitable but as we reads Ephesians 4:22-32 we find that the feeling or emotion of anger is not sin but must be handled biblically before it becomes sin. Dwelling or focusing on our anger can quickly become rage or we can be debilitated and give up. Both are extremes and neither is good. It is a question of what we let control our mind. Again, Paul’s words in Philippians 4:8-9 are instructive:

Handling our anger is a process. We cannot not think about something and very often we begin with anger than may be rightly directed but dwell on it so intensely that it morphs into something else. By intentionally beginning to think of honorable things, right things, lovely things, excellent things our thinking and in turn our demeanor changes. When I begin getting out of sorts over our current political situation and governmental intrusion, turning the television and radio news off and watching a sun set, a gift from God, can be incredibly calming. There are also 3 questions which can be helpful. First ask – what is making me angry. identify it, name it and control begins to set in. Second, ask – what does God want me to do about it? Think of godly biblical solutions. Even writing them down. Third, ask when where and how do I begin. Ephesians 4:22 – 32 gives the negatives to avoid – for instance verse 29 – and gives positives to enact. With the above God has turned what could be manifested sinfully into something positive and good.

It is also the case that what I do often speaks louder in teaching others than what I might say. Remembering that I have limited ability to fix the world’s problems but I can help my grandchildren develop good character and problem solving skills by how I behave in stressful situations gives me a different perspective. Really, the only thing we have control over is how we think and behave. Most of the rest of life just happens to us.