Slaying the Dragons – A Book Review 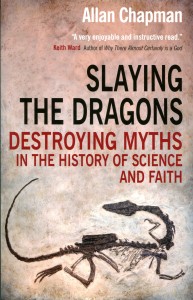 With the great and growing cultural divide between Christians and non-Christians today, discerning between true and false claims is sometimes difficult. The New Atheists have certainly ramped up the rhetoric about the ages long conflict between science and Christianity. But are their claims true? They often sound true but is that only because they are repeated so often without an actual connection to history that most believers are ill prepared to point out where the truth ends and the myth begins. A new book by Allan Chapman, Slaying the Dragons: Destroying the Myths in the History of Science and Faith (Lion Hudson/ 2013/ $16.95).

The author, Allan Chapman, teaches the History of Science at the University of Oxford. In addition he is a Fellow of the Royal Astronomical Society. This would explain the decidedly British flavor in the language of the book, something which I rather enjoy. He explains the impetus for this book:

But as I became more interested in the science and religion scrum – for it rarely rises to the orderliness of a “debate” – in the late 1980s, one thing came to grate on my historian’s sense of fact and context time and time again, namely, the proliferation of myths, confabulations, and downright untruths that flew with ever increasing intensity, especially from the New Atheists, against Christian believers.(p. 12)

He begins with an interesting premise:

I have long argued, live, in print, and on television, that science as we know it stems from monotheism. (p. 13)

This really sets the stage for what follows in the book. As those who have read our Journals or blog for very long know, we love to look back in history in order to better understand issues we are addressing today. The reason is simple, nothing happens in a vacuum, there were a series of ideas and/or events which have brought us to this point in time. In a few pages the first chapter gives a synopsis of how various cultures from 2000 BC until 1550 AD tried to answer questions about the world around them and the Origins of Western Science. Chapman asserts on page 22-23:

Christianity would then go on to inspire the natural theology of the Royal Society Fellows, be the driving force behind the abolition of slavery, supply the moral and spiritual tools that constitute the best and noblest aspects of what we now call, “human rights” – and become the prime target for some of the bitterest abuse that many twenty-first-century sceptics feel compelled to heap upon religious belief (and I have heard a good deal of that first hand!)

The Table of Contents gives not only the chapter title of a short description of each section within the chapter. Chapters 1 & 2 on the “Origins of Unbelief” are well done in demonstrating that not only is atheism not new but the arguments used by the New Atheists today are not new either. They are, for the most part, simply warmed over repetitions which have been answered in the distant past.

Young Earth creationists will be unhappy with the book in this area. Although I tend to a young earth view myself and would disagree with him in some of his beliefs in this area. In truth, the question of “when” will not likely be answered this side of heaven. We have the same sets of evidence but ultimately, since we have no way to get on the other side of the creation event, we end up holding our belief on the when based on how we answer the evidence. However, I think some of what he has to say in chapter 8 on this question is important to note relative to early chronologists:

We must remember, however, that chronologists such as Philo of Alexandria, Julius Scaliger, and Archbishop Ussher, did not share the agenda of modern scientists, and it is an abuse of scholarship to presume that they did. They were less concerned with the age of our planet as a physical object in space than with tracing divine providence through history, and to attempt to read Genesis as a key to exact scientific facts, past and future, is as misplaced as trying to use modern genetics to discover what the angels are made of.

Chapman is correct on this. The Bible is not a science book, although it is not in conflict with science if read in context.

In the main his handling of the claims that the church persecuted scientists in the past is demonstrated false upon a look at what actually happened in history. The church, as it turns out, was a leader in scientific endeavor and a number of the branches of science originated as a result of endeavor to understand God’s creation and how it operates.

Chapman brings history of bear on the claim of persecution of Copernicus, Bruno and Galileo and devotes an entire chapter (9) to Darwin.

For those who can disagree agreeably, this book is an excellent resource. For those who are more easily offended, they should probably skip this one.