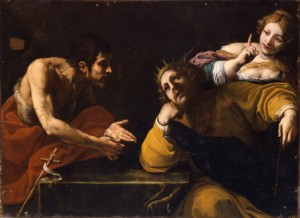 In my last post I defended Russell Moore’s claim that Christians in America are a Moral Majority no more. That is, we can no longer assume that the vast majority of Americans in fly-over country share our basic worldview. Moore has called for a change of tactic away from the rhetoric of the culture war to preserve America in favor of a Christian colony serving in a minority capacity. He refers to it as a prophetic minority speaking truth to power rather than using our power to direct the country towards truth. When I think of the prophet speaking truth to power, I think of John the Baptist and his confrontation with Herod Antipas ruler. Herod divorced his first wife and would have probably killed her had she not fled back to her home country. Herod married his second wife Herodias in violation of Jewish Law. That wouldn’t raise an eyebrow really considering the exploits of Herod’s father. However, Herodias first divorced her husband, Herod’s brother who was also named Herod. It was this little Desperate Housewives scenario that led John the Baptist to denounce Herod’s actions. His head to head with Herod ended with John losing his. The painting  is one depiction of that scene. I like this one because I imagine John pleading with Herod rather than yelling at him. Truthfully, John wouldn’t have been able to get that close to the king. But this highlights one of the major roles of a prophetic minority: Warning.

In fact its the concept of “warning” that we most often associate with prophetic witness. It reminds me of a story I heard when I was a boy in Mississippi. Seems there were two men sitting out front of a the local gas station as old men in Mississippi tend to do. One of them was telling the other about the new preacher at the church and how much he really liked him far better than the previous pastor. “What’s this one got that the other don’t?” Asked his friend.

“Well, I’ll tell you, that old preacher he really preached fire and brimstone. He would talk about the judgment of God and how we would surely feel it if we didn’t repent of our sin” said the first man.

“I take your meaning. This new one don’t do all that.”

“Oh no. He preaches about sin and hell, and judgment just as much as the other one did. He just does it with tears in his eyes. “

I don’t expect that a prophetic minority will be welcome when it warns of a coming kingdom and the follies of ignoring God, but I imagine we ought to do it with tears in our eyes rather than in full-throated fury accompanied by the hum of TV cameras. And here’s a comfort. We’ve been here before. For a very long time, the Gospel was in the minority. First with Jesus and then with the Church during the persecutions. We can exist as a minority again. It will be discomforting. It will be humbling, but it does have precedent.  How do we play the prophet in this age? Its a tough question with far reaching implications so please don’t expect me to give us a blueprint. However, here are some thoughts on what it means to be a prophetic minority:

1) A prophetic minority has something to announce to the culture. What do we announce? The gospel. Not just the the five spiritual laws but the plan of salvation for the world. Jesus through his sacrifice has conquered sin and death and become king of the world. NT Wright gives a picture of Christian engagement in the model of Paul’s engagement with pagan culture in his What Saint Paul Really Said:

Paul’s confrontation with paganism was of course sharp. He did indeed believe, and say, that certain beliefs were untrue, that certain practices were dehumanizing and simply wrong, and that certain styles of community life were not how the creator God had intended people to function. . . At the heart of his polemical engagement with paganism was a radical and deep-rooted affirmation of the goodness of the created world, and, with that, of the possibility that pagans and their ideas and beliefs, could be redeemed by the Christ through whom the world was made in the first place. Hence good news for the pagans; not the sort of good news which told them they were more or less all right as they were, but the sort of good news that which told them that, though they were at present going about things in a totally wrong way, the God who made them loved them and longed to remake them.

I haven’t worked all this out but it seems to me that the less we seek to power the more we should concentrate on this announcement. The Gospel always involves division. It is always a turning away from something. For Jesus’ day, that turning away was from the disastrous pursuit of overthrowing Rome or resisting it. For Paul’s day, it was turning away from the pagan gods and acknowledging the true king of the world. In our own, it will be a turning away from assumptions about world, religion, power, and self. But is more than that. It is a yes to something as well. It occurs to me that a prophetic minority must inevitably warn against foolish and dangerous cultural shifts but it does so not merely to preserve a culture worth preserving but rather to redeem people and bring them into the colony. To do that effectively we must embrace certain aspects of a democratic republic: freedom to speak and worship especially. We should also seek to preserve our right to not participate in cultural practices we deem contrary to our conscience.

2) A prophetic minority must be a refuge from the culture.  The problem with a prophetic minority is that we must live day in and day out with those who think our views are crazy if not our practices. This is the primary ministry of the church. Don Veinot has so eloquently distinguished between the ministry of the church and the mission of the church in his last post. We err when we confuse the two. Our worship and our study should not be designed primarily to serve as mission. Rather our small groups and our Sunday worship should be designed (again primarily but not exclusively) as a safe place where we rest and let God restore us for our daily mission. This means that we are to think of our church as our primary family. It also means that there is a kind of duality to our existence. In the culture we are strangers who have certain rights that should be acknowledged by the culture. And when those rights are ignored we must speak up. However, our primary existence is not living in that culture. And we err when we take that individualist stance into our Christian colony. Here my rights are not as important. My individual wants are subjugated under Christ and are subject to the scripture. Again Paul is our model. In Acts, Paul asserts his rights as a Roman citizen when he is flogged by Romans. He does this again when he is arrested. He asserts his right to have his case before Caesar. To the church at Corinth he reminds them of his rights as an apostle. However, he does not claim those rights within the community:

If we sowed spiritual things in you, is it too much if we reap material things from you? If others share the right over you, do we not more? Nevertheless, we did not use this right, but we endure all things so that we will cause no hindrance to the gospel of Christ. (1 Corinthians 9: 11-12)

In the community, personal rights are not as important as serving the bretheren (and of course, the sisteren:D). Why this double standard? Because the community is supposed to be a family not a government. Classical liberal ideas of rights, freedom, and self-reliance are apropos when one is a minority in a hostile culture. And indeed, Christians have been at the forefront of the fight for freedom because our rights are inalienable because they come from God. However, the reason we ought to champion those classical ideas is not for their own sake but so we can be go about announcing the kingdom. However, within the Christian community, family members don’t assert rights, even though technically they have them. What the alternative to reliance on rights and individual sovereignty within the ministry of the Church? In just a few chapter later, Paul calls the alternative “a still more excellent way”:

Love is patient, love is kind and is not jealous; love does not brag and is not arrogant, does not act unbecomingly; it does not seek its own, is not provoked, does not take into account a wrong suffered,does not rejoice in unrighteousness, but rejoices with the truth; bears all things, believes all things, hopes all things, endures all things. (1 Corinthians 13:4-6)

That certainly doesn’t sound like modern individualist culture (either Right or Left). It sounds like something totally different. It sounds like a revolution. If we are to be a prophetic minority as we once were long ago, then we must learn how to live in these two different worlds of mission to the culture and ministry to each other. What do you think? How does a prophetic Christian engagement look different when our worldview is a minority?