A Meditation on Evil 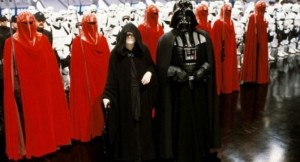 I’ve been thinking about evil lately. Too many trips to the comic book store I suppose. In my musings I first thought about Augustine’s definition of evil. Evil is a privation. It is the lack of something not some malevolent force. Thus evil is always a corruption of something good. That made me think of Vader. The story of Darth Vader is poignant and positively Shakespearean. In an effort to save his true love, Padme, he makes a deal with the devil, the Emperor Palpatine. However, this Faustian bargain is really just the culmination of a life life long fight within himself. Vader’s fall to the darkside is a result of a privation within himself. He is corrupted so easily in his quest for control. This lead me to consider the words of the prophet Jeremiah as he contemplated the sin of his wayward Israel:

The heart is deceitful above all things, and it is exceedingly corrupt: who can know it? (17:9)

Who can know it indeed? If Anakin Skywalker could have recognized that his fear of losing the ones he loved could cause him to bargain away his soul, he would never have been a slave to the Emperor. His evil illustrates the tragedy of corruption. But in popular culture there are other–for lack of a better word–species of evil. Consider the boogey-man of our time: The Joker. 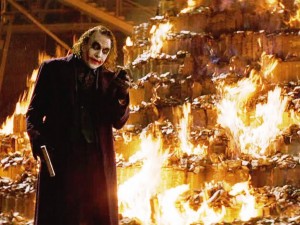 Played masterfully by the late Heath Ledger, the Joker is in some ways the most chilling evil because it is the epitome of irrationality. In the scene above, that burning pile is money–the ill gotten gains of the vast criminal conspiracy in Gotham’s crime-ridden society. The Joker set it on fire to prove a point. Everything burns. The Joker is evil because he simply wants chaos and we never really know why. As Alfred, Batman’s erstwhile Butler says,

[S]ome men aren’t looking for anything logical, like money. They can’t be bought, bullied, reasoned, or negotiated with. Some men just want to watch the world burn.

There is a species of evil that is born out of the greatest privation, a corruption of the thing that makes us most human–our capacity for reason. But by far, the most interesting and terrifying evil is the sympathetic villain who really–deep down–thinks he is being just and good. There are many of these in the literature of my people (The Geeks). Lex Luthor who believes no one should have as much power as Superman. There is Macbeth who tragically rationalizes his actions. But my favorite is Eric Lensherr (AKA Magneto or Max Eisenhart). Played brilliantly by Sir Ian McKellan, Magneto is the quintessential sympathetic villain.

Having experienced the horrors of a concentration camp during World War II, Magneto discovers that he has the power to control magnetic fields and the power to make sure nothing like the holocaust ever happens again. Of course to do so, he will have to enslave the human race and lead a mutant revolution. But as Jeremiah says, every human heart is wicked and like Vader, Magneto corrupts his character. He has a zeal but not according to knowledge for he does not realize that to control with God like power would require God’s pure character–something no human possess. As Charles Xavier (MLK to Magneto’s Malcolm X) says, in trying to prevent evil, Magneto becomes exactly what he hates. And that really is the human condition. We are all Vader. We are all subject to corruption in our efforts to control our world. We all want to be God in one way or another. And in our misguided pursuits with these perilous estates we call our flesh, we often forget that actions create character and our reason is inexorably affected by our virtue or our vice. Perhaps this is why Jesus goes to such lengths to instill into his disciples how radically different his agenda is:

And Jesus called them to him, and saith unto them, Ye know that they who are accounted to rule over the Gentiles lord it over them; and their great ones exercise authority over them. But it is not so among you: but whosoever would become great among you, shall be your minister;and whosoever would be first among you, shall be servant of all.For the Son of man also came not to be ministered unto, but to minister, and to give his life a ransom for many (Mark 10:43-45).

“It is not so among you.” I love that line. I don’t know if Jesus said with a tone of warning or pleading or both. But it really is one of those things that separated him from all the would-be Messiahs running around the Judean desert. It is also the greatest cure for power and lust. Don’t exercise authority over the world. Even if its for good reasons like running the Romans out on a rail. That’s not how my people do things. And of course his timing was perfect since he utters these words just before he goes to die himself. The ultimate sacrifice. The way of victory is not power but sacrifice. George Lucas is not a Christian by any means but some of that universal truth slips through because what defeats the evil emperor is Darth Vader’s redemption not his power.

It is perhaps the greatest secret embedded in creation that love not power is the path to restoration of brokenness.