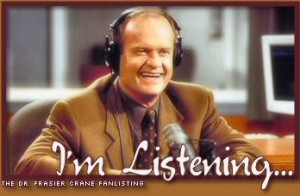 Years ago there was a book entitled Listening to Prozac . I don’t want to suggest by my title that I think Atheism is a mental illness that requires medication. I wouldn’t be so arrogant or dismissive as to think those who fundamentally disagree with me are wicked or insane or both,  though some prominent Atheists have said as much about Christianity. As I’ve mentioned a few times, for whatever reason, I have a soft spot for atheists. Today I want to look at an atheist who seems to have a soft spot for Christians. Jason Rosenhouse has written a book entitled Among the Creationists: Dispatches from the Anti-Evolution Front Line. I won’t go into a critique of his ideas about the Creation/Evolution/ID debate in this post. We can save that for another time. What I am interested in his opening chapter entitled “My Problems with Religion.” I want you, dear reader, and I to do exactly what my title says. Honestly listen to this particular atheist and thoughtfully respond. In order  to do that, I’m going to attempt to summarize Rosenhouse’s chapter accurately and fairly. And then I’m going to stop. I’m going to ask you to do the same. I’ll save my critique until next week. Norman Geisler once said that atheists should be respected as the loyal opposition because they make us stronger and better.

Rosenhouse begins by admitting that “religion is simultaneously fascinating and frustrating . . .” This seems to be evident throughout his book. He tells of attending many Christian conferences especially ones on intelligent design. Rosenhouse is a mathematician (Assoc. prof at James Madison University) who has written popular books on the math behind Sudoku, among other scholarly works. From the start, Rosenhouse makes clear that while he is an atheist, he is also respectful:

I am an atheist. That means that I do not believe in God. It does not mean that I am metaphysically certain there is no God, that I wallow in nihilism and moral relativism, that I think science has explained everything, that I think religious people are stupid–or that I partake in any of the other asinine caricatures of atheistic belief you may have heard.

This admission alone gives me pause. He doesn’t think religious people are stupid. Misguided. Wrong. but not stupid. In fact, Rosenhouse comes off as someone who is genuinely baffled by religious people as if there is sincere puzzlement at what it is that we religious folks are on about.

As you can imagine, it is a source of frustration to me that most of my fellow Americans see things differently. . . I wonder what religious folks know that I do not. Do they have some insight that I lack?

Now that’s an honest question. And it deserves an honest answer. But not right now. Right now, I’m listening. He goes on to detail the things he finds baffling about religion. What is interesting is, however, is what he gets about religion. If by religion we mean, “cultural identity and social community,” then that isn’t baffling at all. This is interesting to me because of all of the talk about “community” within our modern church movement. Community makes sense to Rosenhouse. Its doctrine that offends:

Whatever else it is, religion is also about putting forth a large collection of propositions relating to matters of empirical fact–many of which seem highly dubious. That the earth is superintended by an all-powerful, all-knowing, all loving God is already a tough sell given ludicrous quantities of rottenness in the word.

I know, I know. Some of you Christians are thinking, how can a worldview that explains everything in terms of four fundamental forces and atomic particles have room for “rottenness” other than as a purely subjective concept, but temper your ardor and listen. If God exists then there is rottenness to explain. One way of dealing with rottenness in the world is simply to believe it is meaningless–the result of a random world filled with human beings acting on deep biological urges. In fact, apart from God, that seems the best, most rational way of explaining all the rottenness. But evil isn’t the only thing he finds baffling–Jesus really puzzles him as well:

I have been told repeatedly, by people genuinely concerned about my soul, that Jesus was God in human form, lived a sinless life, and died on the Cross in payment for sins I would commit thousands of years later. They warn of the gruesome fate awaiting me in the afterlife, pending my failure to get with the program. In their more poetic moments they tell me I have a God-shaped hole in my heart that only Jesus can fill. I do not understand how people come to believe such remarkable things.

And to those who would begin running an argument about the historicity of Jesus’ claims, Rosenhouse admits that he sees no reason to think the Bible is anything special:

People keep telling me that the Bible has significance far exceeding its historical and literary value, sometimes  describing it with phrases like “the Word of God.” It i unclear to me what reason there is for thinking it is any such thing.

At this point, Rosenhouse begins to expound his frustration with Religion’s power and authority to explain the natural world. What he says will seem very familiar to those of us who have listened to debates about science and religion. What is interesting is that he immediately heads off the claim that science and religion are simply two separate spheres–neighbors with no direct conflict.

What has religion actually given us to justify its status as a “way of knowing”? By what method do I distinguish correct theological assertions from incorrect ones? How is “bad theology” different from “theology I happen to dislike”?

This is an honest longing to have religious questions answered in the same way that scientific questions are answered. Rosenhouse seems to desire the same level of precision in questions of faith as in testing hypotheses in physics or mathematics. And before we criticize him for that we should listen.  For Rosenhouse the concept of a purely spiritual being with a mind (but no physical brain) is not ludicrous but simply baffling:

We are told that God exists outside of time and that to Him the past, present, and future exist simultaneously. It is possible to write those words, but can you really picture what they mean . . . Just to be clear: My point is not that my failures of imagination show that God does not exist. It is simply that invoking God to explain the universe seems like an instance of the cure being worse than the disease or of filling one hole by digging others.

If I understand him, Rosenhouse is saying that yes Atheism (and its worldview of physicalism and empiricism) has its difficulties but they are preferable to the metaphysical difficulties of free-will and divine foreknowledge and eternal timelessness. He continues:

We can hypothesize that the sorts of natural forces that have adequately explained 99% of everything are also adequate for the few puzzles that remain. The alternative involves inventing an omnipotent deity, thereby saddling ourselves with a collection of conceptual difficulties far more disturbing than anything found in nature. In the end I am not an atheist because I thereby have a ready answer to every existential question. Atheism just makes fewer demands on my credulity

And there we have the crux of the debate when Atheists and Christians sit down and talk–how big a chasm is there between a scientific mind and faith in Christ. Believers think that chasm is not so great–that one does not have to commit intellectual suicide in order to “get with program” to use Rosenhouse’s phrase. Atheists, think that gap is a gaping chasm and on the other side is a kind of passivity about some of the most important questions in the universe and likely a smug, condescending sympathy for the poor benighted folk  who refuse to give up their intellectual freedom and integrity. The real debate between Atheists and Christians is how wide is that gap. Christians try to claim the gap is not so wide by marshaling intellectual arguments for God’s existence, the historicity of the Bible (mostly to prove the historicity of the Resurrection). We spend a great deal of our time our claims are not all that fantastical. We also criticize the scientific mind on the other side of the gap. We criticize modernity and say things like “I Don’t Have Enough Faith To Be an Atheist” And so both sides scratch their heads from across the divide. What to do? Well, part of the answer is to take their bafflement seriously and address their puzzles and not get bogged down into debates that don’t do anything to argue the divide is not so big. However, we do Christianity a disservice when we try to deny the divide exists. Scientific materialism and Religious faith are not simply two different spheres. They are two opposing ideas. Any attempt to make them neighbors only adds to the atheists frustration and perplexity. It certainly doesn’t make the divide look any easier. Also if Rosenhouse is right, it won’t do any good to simply hide our allegiance to doctrine like an unsightly stain on the carpet when company comes over. For Rosenhouse, our doctrine is the sticking point and it will not make Christianity any more palatable if we try to de-emphasize it with bromides about community and authenticity. As for the rest, I’ll leave my thoughts for next post. What I am going to do is pray. Pray for wisdom far above my meager philosophical understanding and patience and humility to honestly listen to what Rosenhouse has argued here. I pray that I can see in his argument not only what he thinks is there but what we both may be missing. As always I invite your comments as I work out my response with fear and trembling.