All I Ever Really Needed to Know about Sex, I Learned Watching Television 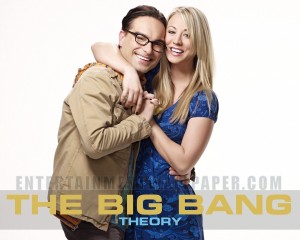 Recently I had the dreaded stomach flu that is going around and to put it in Victorian terms, I was indisposed. It seemed that the only thing that helped with nausea (besides the prescriptions) was watching sit-coms. I got the 3rd and 4th season of the Big Bang Theory from my library because I am a geek and the show is very funny. In my last post, I said something about the difference between watching a 22 minute show and watching a 3 DVD season of a show:

But one wonders if Aristotle’s philosophy can hold up to an age of Netflix and the 4 DVD collection of Season one of Downton Abbey. One wonders if Paul and Aristotle would scratch their heads or shudder at the thought of  us setting up the theater in our homes every single night after dinner.

Watching back-to-back seasons of Big Bang Theory did confirm to me there is a difference between imbibing a little television and downing the equivalent of a box of Merlot. But I also noticed something else. The sexual content of the show is more noticeable after a 4 hour straight viewing session. As a philosopher I like to engage in thought experiments. So I imagined if I were an alien race listening in on our prime-time television, what they deduce from watching our prime-time sitcoms. One thing is for sure,  they would definitely think sex is one of our top priorities–having, losing it, getting better at it. So suppose this same alien race were to compile a dossier of our sexual behavior via prime-time television. I think it would look something like this:

For humans, one’s ability to please sexually is so important that potential mates will ignore numerous character flaws provided they are good in bed.

Our alien observers would undoubtedly pick up on this theme as it is prevalent in many sitcoms or prime-time dramas. It doesn’t matter that one’s partner is a jerk or selfish or self-destructive. I show my age when I reference Friends but the best example is the character Rachel who stays together with a real jerk named Paulo. He is sexists, egotistical and hits on Rachel’s friends in plain sight. When questioned why she would stay with him, the only response Rachel can give is that he is a great lover.

The health of any relationship and the compatibility of the couple is measured by how well the couple has sex together. This is never more apparent than when Penny and Leonard from Big Bang Theory finally take their friendship to the next level and have sex. What they discover is that the sex is awkward and just “okay.” There is a palpable disappoint that their love-making isn’t mind-blowing. Never mind that fantastic sex seems to come from years of monogamy rather than instant attraction. (As if one could master an instrument because you were born to play the trumpet.) When characters in sit-coms express disappointment with a relationship, inevitably the barometer is always measured between the sheets.

Sex is often better than drugs or alcohol to numb the pain of life or relieve boredom.

Granted, the two often go together on prime-time TV but sex definitely replaces alcohol as the drug of choice in prime-time. If you watch Grey’s Anatomy, you would think that hooking up is much more relaxing than having a drink at the bar. Had a bad day with that triple-bypass? Hook up with the intern for a few hours. Mad at your ex-husband for getting married to someone with less psychological baggage than you? Have sex with the chief of medicine. Leonard and Penny break up because their relationship was going too fast. This was because Leonard was too emotionally attached to Penny who doesn’t want to commit to Leonard. Our alien friends would certainly note that the humans believe that  emotional attachment and sexual attachment cannot be correlated since there are numerous attempts to separate the two. As Leonard says in a drunken fit of self-deprecation, “We are going to have sex and its not going to mean a thing!” Yet they might be puzzled as to why these attempts often lead to sadness, despair, and more sex with others.

Paradoxically, What everyone seems to want is an emotionally fulfilling, intimate and lasting relationship.

And sit-com characters think that hooking up with enough people in an endless round of barhopping, will somehow put them in front of their soul mate. Despite the attempts to separate sex from friendship, The Bachelor (and every romantic comedy) still hold out hope that two people can find each other and live happily ever after. The shelves of bookstores are filled with self-help books on how to find and keep a relationship alive.

Now you might be saying, so what? Of course secular television is replete with sex and violence, that’s why Christians shouldn’t watch such things. It’s an interesting thought experiment but its nothing new. The American Family Association has cited this since the late 80s. Yes, this is true. We have registered our displeasure and we have been told, “Lighten up. What’s the big deal.” Meanwhile we see more divorce, marital unhappiness, poverty, and emotional scarring. Despite the fact that the world is relatively stable and there is less violence in the world, more people are unhappy. Mark Heard writes as if he is looking out a window at society when he says:

Is there any value to committed Christians standing vigil and pointing out the paradox of sensuality, that the pursuit, while thrilling, rarely lasts? I think there is. It is pretty clear that moral strangers (those who don’t share our worldview) will likely scoff at our puritan values (and point out that many in our own camp can’t seem to stay faithful either). Boycotting the advertisers only seems to get us on the news. Perhaps we must simply play the part of the prophet and point out the inconsistencies and the dangers of trying to insulate ones self from attachment in the pursuit of pleasure. For at least some people might have ears to hear.

I’ll ask you dear reader, if media is merely a reflection of our culture, as so many in the media claim, what does that say about our cultural values today? How can we use the observations and lessons from media to understand and, like the prophets of old, speak to culture and the church?