There is a game being played in discussions between Atheists and Christians without most of us realizing it. Let’s call it the Genocide Ante. In order to make out that the other side is worse for the world, both sides start comparing body counts. It starts when someone asserts that religion or atheism is more immoral. Of course both sides are sure its obvious that there is more blood on their opponent’s side than their own. Sometimes its a more subtle version of this game that gets played. The debate may be about which worldview Christian or Atheist is the most consistent morally. Either way, someone starts comparing body counts and atrocities. Usually its the atheists that insist its absolutely obvious that Christianity is as Christopher Hitchens claimed, a violent and evil system responsible for untold deaths and lots of nastiness. Almost always the Crusades are brought up. 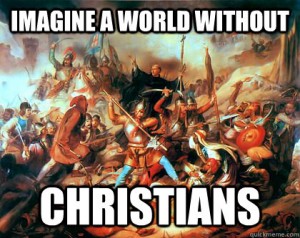 Sure that Christianity is responsible for the Crusades and sure that the Crusades and the sacking of Jerusalem was unprecedented, the erstwhile atheist insists the world would be better off without this bloody religion. At this point the Christian (usually without acknowledging that the sacking of Jerusalem was nasty business) ups the ante. “I see your crusades and raise you one Maoist Glorious Revolution.” The Christian then points out that the twentieth century genocidal rampages were almost always headed by an atheist. 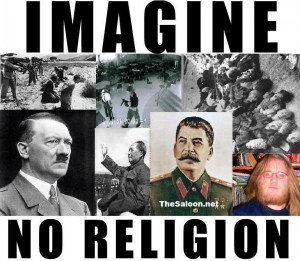 Then the atheists retort that it wasn’t Mao or Stalin’s atheism per se that caused them to be genocidal monsters. It was their totalitarianism. Then the atheist ups the ante by saying something to the effect, “Why can’t you see the effects of the inquisition, 30 years war etc. are the result of the Christian system which just teaches people to be slaves?”  Of course the Christians respond with the same sort of answer the atheist just gave. . It was in spite of the clear teachings of Christ not because of them that Crusaders, Inquisitors, The Catholic Church, and The Protestant Reformers in Geneva engaged in violence. If things get really interesting there is talk about what religion Hitler actually believed in or whether he was just secular or just a weird genocidal occultist. An Atheist friend of mine pointed me to an article by a skeptic/atheist that is an unconventional take on the Genocide Ante:

In summary, the winner of these debates is the one who can convince the other that the big 20th century genocidal maniacs were motivated either by religion or by a desire to destroy religion. The entire debate is the logical fallacy of the excluded middle . . . I don’t care whether they go to church or not. Killers don’t really kill because of their religion. Neither does a lack of religious convictions cause one to run wild in the streets with a bloody axe and a torch. Religion is a convenient banner for many to carry, but there are plenty of other banners available as well, and if it wasn’t religion, they’d do their deeds under some other justification, if they care to even have one. The real reason they do their evil deeds is that they’re human. Humans are very smart, very capable; and when we want something, we generally find some way to get it, even if that means killing someone or committing genocide.

Mao’s atheism may not have been the direct cause of  his callous disregard for human life but if you hold the view that human beings are fundamentally just atoms in motion and the product of nothing but physics, it is easier to justify. This is not to say Atheism cannot point to moral principles (and I think has its greatest hope of staving off amoralism with the social contract tradition) to say Mao is wrong and atheists should be and are some of the most ethically conscious people. But once Communism adopted atheism it became easier to justify the purges of those who disagreed with them because well, its just a random collocation of atoms. Works for fetus’ too. And this is because of a more specific claim I made in a previous post: Ethically nothing follows from the adoption of atheism. Atheism is consistent with any set of ethical principles.

It is certainly evident that people who espouse a Christian worldview can be evil. Under the flag and in the name of Christ people have murdered, raped, and tortured others wrapped it all within a cloak of righteousness. However, I think its just as wrong-headed to use this strategy to claim Christianity is stupid or wicked or both (to paraphrase Richard Dawkins) and use the Crusades, 30 years war, or the Inquisition as your line of evidence and for the same reason. Because the Christian can respond that it isn’t Christian belief that is the cause of said violence.

This is a reasonable response for two reasons. First because bluntly The 30 years war was Christian in the same way the Olive Garden is Italian. History shows a power struggle that was within a Christian worldview but hardly waged by the devout. Same goes for the Crusades (and if you want an argument that the Crusades were not as brutal  or as unprovoked as their myth has become, check out Rodney Stark’s God’s Battalions: The Case for the Crusades).

For us Christians this is no surprise because of one of our main presuppositions: Human beings are basically warped not basically good. We crave power, we suck it up like newborn babies, and we will ignore God, country, and family to keep it. The emperor from Star Wars had it right: All those who gain power are afraid  to lose it. The author of the article tries to explain this warped nature as a holdover from evolution. He says, “The real reason they do their evil deeds is that they’re human. Humans are very smart, very capable; and when we want something, we generally find some way to get it, even if that means killing someone or committing genocide.” We can tell an evolutionary story about how competition and territoriality was a useful trait in the bush, but Christians look at the bloodshed and debauchery of Christians as indications of the Fall not a feature of time and chance and the laws of nature. So pointing out the millions of people hurt and killed by Christianity isn’t fruitful as a to show we should all abandon faith. It just begs the question.

While I think scientific materialism makes it easier to justify genocide and that Christian doctrine makes it harder to justify. The author of this article and I agree on one thing:

Religion does not cause you to kill people, and it certainly doesn’t prevent you from killing people. Let’s stop pretending that it does either.

It may surprise you that I think the same goes for atheism. The Genocide Ante is a poor tactic and a fool’s game. Its distracting from important and substantive discussions about Atheism and Christianity.