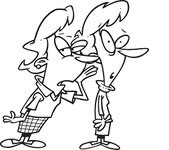 Maude calls her friend Mary on the phone and says, “You know that I never repeat gossip.”

Maude states brightly, “Good, then listen close because I am only going to say this once.”

One of my favorite pastors is Ray Kolbocker at Parkview Community Church in Glen Ellyn, IL. Perhaps it is because we have similar backgrounds. He grew up agnostic and I grew up atheist. We both had similar experience and view of the church. We both put it this way, “I didn’t understand the church before I was a Christian and my understanding hasn’t improved since. It is this weird club that you have to admit you are sinner to join and then for the rest of your life pretend you are not. I don’t get that.”

It is a bit of a pickle I admit. We are called to live holy lives but sometimes, perhaps often, Christians tend to feign a holiness that is not real or genuine and even find ways to mask something they are doing to give the appearance of at least sounding more spiritual than it really is. Some sin is easily identifiable, adultery, homosexuality, etc, while others, such as gossip, seem somehow more acceptable. This is what we might call “sanctified gossip” and it is practiced fairly often in a variety of ways and seems to go unnoticed, at least by the faithful.

Some years ago I pastored a small church. At one point one of the men approached me and said, “Pastor, some people in the church are wondering why you don’t ask me to speak from time to time and they are a little unhappy.” Most churches have at least one such individual. I asked why they haven’t talked directly with me. After all, if I have offended someone, biblically they are to approach me. In addition, as the pastor I have to be the most accountable person in the church. The higher one is in church leadership they more accountable they are. Leaders live in glass houses and everyone around them has Windex! He said that the people were afraid. I was puzzled, because I don’t see myself as scary. So, I suggested that he arrange to have the ones who were wondering this (and other things he had claimed from time to time that people were wondering or unhappy about) and that he should be there as their advocate to make sure I didn’t bully anyone. Somehow the meeting never materialized. I am not sure to what extent people were “wondering” such things but I am sure some sort of gossip was going on in the back ground under the guise of helping the church to grow. Sometime later another pastor was called, the gossip mill began in earnest and by and by the church closed its doors. Gossip is a desperately harmful poison. Once it is released it is difficult to contain and is resistant to disposal.

Another way I have seen this manifest itself is under the pretense of being in a prayer group. While sharing prayer requests one elderly woman asked for prayer for a certain man in the congregation who didn’t happen to be there that evening. She asked for prayer for his marriage which she suggested, “may be in trouble.” The reason she gave that his marriage “may be in trouble” was that she saw him a few days earlier in a restaurant having lunch with a woman that was not his wife. It is true he had lunch with a woman that wasn’t his wife. It was, as it turns out, his sister in town for a few days visit. The problem with gossip, sanctified or not, is once it is floated out there the damage begins its work and grows exponentially. We did an article some years ago titled, “Beware the Rumor Weed” which also may be helpful on this subject. Just for fun I Googled “The Church Lady+gossip” and came up with 14,500,000 results. I didn’t read them but the link titles demonstrate the size of the problem.

Unbelievers do observe the people and behaviors within the church and make decisions on the credibility of the claims of Christianity based largely on what they see. As the old saying goes, “What you do speaks to loudly that I cannot hear what you are saying.” Many otherwise faithful and well-meaning Christians fall prey to the practice of “sanctified gossip” towards non-believers. It is indeed not only an annoying but destructive habit and results in a loss of being taken seriously in the public square. In our article “Beware the Rumor Weed” we expose several of the false claims and gossip which Christians engage in such as the claim that Madelyn Murray O’Hair is trying to have all religious broadcasting terminated from the air waves. The first problem is that she is dead and the second is that she never had attempted to ban religious broadcasting as far as we can discover. Another is the claim that Proctor and Gamble is somehow dedicated to serving Satan. In this story the president of P&G is supposed to have appeared on a television talk show bragging about their commitment to Satanism and their logo being Satanic. The show this supposedly occurred on has changed from time to time during the life of this particular gossip, mostly because it never happened. But that does not seem to deter the sanctified gossip mill.

This not only goes on within the confines of the church but is often directed toward those outside the church with whom we disagree. Human nature tends to view the world as white hats and black hats. Those who agree with us wear white hats and those who think differently are black hat wearing villains. This has been especially pronounced on both sides in the current political campaign. How do we address the problem? I think James says it well in James 3:1-2:

Let not many of you become teachers, my brethren, knowing that as such we will incur a stricter judgment. For we all stumble in many ways. If anyone does not stumble in what he says, he is a perfect man, able to bridle the whole body as well.