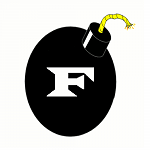 I begin a series today about seven very annoying things Christians do. I’m taking my cue from Jon Acuff’s very funny and thought-provoking blog Stuff Christians Like. We begin with those Christians who drop the F-bomb.

Relax not that F-bomb though I’m sure that F-bomb gets dropped by more neo-evangelicals in ripped jeans and soul patches under the rationalization that they are “keepin it realz” than we would like to admit. No the F-bomb to which I’m referring is a very nasty use of the concept of “faith.” In order to correct someone (out of nothing but love of course!) one questions someone’s faith in God to do whatever. To whit–“You just don’t seem to have enough faith.” Some of you dear readers have been on the receiving in of that particular piece of holy ordinance and are nodding your heads. Don’t nod too hard cause chances are you’ve fired one off without realizing yourself.

Something that recently happened to my wife will serve to illustrate the nature of this incendiary device favored by God’s misguided lambs. To understand the context, you have to know how much my wife loves being a mother and living in community with other mothers doing motherly things. Her particular moms group is one of the few things that keep her sane along with Chai tea and facebook. Its her little island of adult conversation in a sea of toddler whining and pre-schooler angst. This particular mom’s parachurch ministry is open to all denominations but is always sponsored by a local church. Her group is sponsored by a local Congregationalist Church but our family doesn’t go to church there. Stacie just volunteers with the mom’s ministry. Anyway, the church is enjoying that most favorite of pastimes within protestantism called “Let’s fire the pastors over something petty that we’ve never really said anything about until now and pick a fight with half the congregation.” The specifics are not important. However, suddenly the mom’s group under the umbrella of said war zone is caught in the crossfire. It just so happens all the other moms are on one side of the battlefield and want to leave and start a new church a mile or two away. (that’ll show em!) My wife is sympathetic but wisely stayed out of the dispute.

However, the mom’s ministry has to renew its charter and its not looking like Congregationalist church is going to renew. With the permission of the group my wife starts looking for another church to sponsor the group. All fine and dandy until a few weeks later the president of said organization–one of those about to jump from Congregationalist to the new church plant–dropped the F-bomb. She told Stacie to wait on seeking a new venue until they could get the church up and running. Stacie expressed that the charter had to be renewed or mom’s group would have to pay the full start up fee and why not find a church that is already established for the mom’s group and let the new church plant grow. She was told that it seemed she didn’t have enough faith in God using their church plant.

Think for a moment with me. Is there anyway to deflect the F-bomb without coming off as a bad Christian, un-spiritual, in denial, etc.?

That’s the problem with being so bold as to question the temperature of someone’s faith when it seems they aren’t doing what we think they ought to do. There’s no winning strategy for defending yourself. The F-bomb robs you of moral high ground. The first one to use the faith card wins. I think its because the F-bomb is a piece of razor sharp shrapnel covered in a thin veneer of the appearance of genuine spiritual concern. And it’s so easy to throw. I’m frustrated with a friend who can’t seem to kick his addiction? Its easy to say “You don’t have enough faith.” Someone questions my decision to take a risk because it might–just might– be unwise for my family but I really, really want to do it anyway? It is so much easier to lob the F-bomb and then sit safely in the bunker of self-righteous indignation.

That’s the thing about grenades. You can’t really deflect them and if you try to lob them back you could get blown up just the same.

I’ll make a bold claim with the concession that I’m willing to be proven wrong: While we are to admonish and correct our fellow believers, the only person qualified to use the F-bomb is Jesus. He’s the only one who can safely and accurately target our hearts with that particular accusation. He does it a lot in the Gospels.

But if God so clothes the grass in the field, which is alive today and tomorrow is thrown into the furnace, how much more will He clothe you? You men of little faith!

And He could do no miracle there except that He laid His hands on a few sick people and healed them.  And He wondered at their unbelief.

Interestingly, the only thing that amazes Jesus more than lack of faith is the exercise of it.

When He was not far from the house, the centurion sent friends, saying to Him, “Lord, do not trouble Yourself further, for I am not worthy for You to come under my roof; for this reason I did not even consider myself worthy to come to You, but just say the word, and my servant will be healed. For I also am a man placed under authority, with soldiers under me; and I say to this one, ‘Go!’ and he goes, and to another, ‘Come!’ and he comes, and to my slave, ‘Do this!’ and he does it.” Now when Jesus heard this, He marveled at him, and turned and said to the crowd that was following Him, “I say to you, not even in Israel have I found such great faith.

Dear reader, I invite your suggestions for some of the other highly annoying habits of Christians so I can fill out my list. So far I only have three but I have “faith” that I will find plenty more.