Where Has Oprah Taken Us? – A Review

Where Has Oprah Taken Us? The Religious Influence of the World’s Most Famous Woman, by Stephen Mansfield, Nelson Publishers 2011, Hardback, 246 pages, $22.99 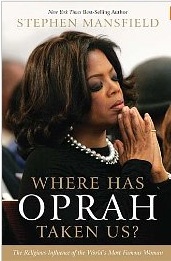 This book could be titled Everything You Ever Wanted To Know About Oprah Winfrey and Much Much More.  Stephen Mansfield’s book is a insightful page turner and an incredibly interesting read. He is a New York Times Best-Selling Author and Biographer. He is well researched in Eastern Mysticism and is also a professing believer in Christ.

In the early chapters Mansfield sketches a fast moving biography of Oprah Winfrey (born February 1954) and pin points the exact time, location and decision made by her that propelled her away from her Christian roots and into a thought system where she would welcome any idea including those of mystics, gurus and self realization proponents. Winfrey mistakes good feelings for self actualization and God. She foists on her audiences that message of self actualization and mysticism rather than absolutes. There is no doubt that she has become the high priestess of heresy supporting an eclectic bag of mystical religions.. She started her TV career in the late 1970’s and has been on the rise steadily ever since. She is a perfect match for a rootless, undiscerning, anti Christian culture like ours.

There is no doubt that Winfrey has a way of connecting with her audiences and convincing them that she is one of them. She has women believing that she is their own personal girl friend or a gal buddy who lives just down the street. She leaves no question about her abandonment of Christianity when her guests include Marianne Williamson, Eckhart Tolle and Deepak Chopra and many other self actualization and self help leaders. These New Age Masters pushing Hinduism are applauded and promoted along with their books and paraphernalia. No doubt Winfrey has bought into all of this and refers to herself as a “spirit connected to greater spirits”, (Mansfield, page Xl). In entertaining and promoting these kinds of false teachers Winfrey is clearly violating God’s Word. Second John warns against a fellowship that is too wide while Third John refers to a fellowship that is too narrow (even excluding the Apostles). In giving her blessing to all kinds of heretics Winfrey falls under the condemnations of Second John.  All of this is clearly and heavily documented by Mansfield. He does this without being shrill but measured and factual.

Mansfield sums up Winfrey’s religious philosophy; “Viewers were encouraged to embrace their divine selves, to live in terms of the Hindu concept of karma, and to transform their reality through visualization. They were taught to create physical healing or to overcome poverty or to fashion success by changing and focusing their thoughts. To the delight of her fans, Oprah herself began emerging from her interviewer’s role to extol the benefits of her unique religious life. She taught her followers the technique of ‘Remembering Your Spirit.’ She modeled the chanting of Hindu mantras. She invoked the spirits of her ancestors. On one program, she prayed for the needs of a viewer. She insisted that there is more than one path to God and enlightenment and she began to feature spokesman for alternate faiths on her show. She spoke of a great awakening of  vital spirituality wrung from the stony confines of traditional religion. So influential was Winfrey’s call to this novel brand of mysticism that the pundits began respectfully speaking of her as ‘America’s Pastor’”, (Ibid Mansfield, page Xll).

At a 9/11 event in New York City  Winfrey asserted; ‘When you lose a loved one, You gain an angel whose name you know….over 6,000 and counting, angels added to the spiritual roster these past two weeks. It is my prayer that they will keep us in their sight with a direct line to their hearts’, (Ibid Mansfield, page Xll). Where Winfrey got the number 6,000 is puzzling but nevertheless she is conveying to her audience her proclaimed insight into the after life and angelic realms which are in fact more imaginary, occultic and spiritualistic than  biblical.

While genuine believers want to talk about a relationship with Jesus Winfrey wants to talk about a relationship with New Age spirituality and mystics. Her estimated worth is about 3 billion dollars making her one of the richest women in America. Her vast influence has been referred to as the Oprah Effect. If someone off the street suggested the religious ideas about being connected to the greater spirit and imagining ones way to success we would give them a wide berth no doubt. When they are extremely rich and famous we applaud them as deeply religious and deeply spiritual. Nothing succeeds in America like success.

Early on Winfrey’s shows became more like freak shows and she was compared to Jerry Springer. In one show she went so far as to say in her interview with a quadriplegic transsexual who birthed a child by artificial insemination that; “This child will grow up with more love than most children. Before I was one of these people who thought all homosexuals or anything like that were going to burn in hell because the Scriptures said it”, (Ibid Mansfield, page 39). It seems that nothing was off limits to Winfrey not even mawkish shows that exploited the insanity of our society and the neediest among us. Winfrey seemed to declare all things clean except of course the Biblical approach to life.

Mansfield chronicles the very public and well known leap of Winfrey into immorality and her slide into depression and suicidal thoughts in the 1980’s. Her sprint away from true Christianity took her to a very dark place; she herself exposed these things to her worldwide audiences, (Ibid Mansfield, page 41).

Mansfield shows from the public statements of Winfrey herself that she can be arrogant beyond belief; (Ibid Mansfield, page 46). He then traverses briefly into Winfrey’s situation with her live in boyfriend Graham Steadman. Winfrey is quoted as saying that she and Steadman would kneel to pray together before they climbed in bed together. He concludes that; “Oprah Winfrey’s religion is primarily Oprah Winfrey”, (Ibid Mansfield, page 48). She has created her own brand of self help non reality that does not include either morality or the Bible.

Things went sour for Winfrey in the early 1990’s and her ratings began to plummet. People have forgotten that her shows had become freakish, raw, and in many cases overtly sexual. On many occasions they were just downright weird. Specific shows are detailed by Mansfield. He documents on pages 52-56 that there were few boundaries for the Oprah shows and that they were controversial, edgy, titillating and consequently  driving her career into ruins. Eventually the threat of ruin motivated Winfrey to switch to self help themes along with mysticism and alternative religions. From a sociological standpoint America was ready for this very thing. Gnosticism, mysticism and self as god ideas were taking root everywhere. Winfrey had hit her stride.

Mansfield in the entirety of Chapter 3 (pages 75-116) lays out exactly why and how Winfrey was shaped by the culture and how she in turn shapes our culture. . In that very informative chapter Mansfield takes us on a history tour of the 1960’s and 1970’s showing how and why eastern mysticism and arcane religious philosophies overtook America and why America was ready for it. Knowing the how and why is incredibly instructive. The insights of that chapter alone are worth the price of the book.

Winfrey in her come back introduced her longtime spiritual advisor Marianne Williamson and of course the book A Course in Miracles which was being hawked by Williamson. The book A Course in Miracles was written by the late Helen Schucman and claims to be channeled messages from Jesus Christ Himself. Schucman claimed she was only a scribe for Jesus.  Jesus seems fine for Schucman, Williamson and Winfrey when He is supposedly giving out messages contrary to the Gospels. The biblical Jesus is rejected for the new channeled Jesus. The new Jesus jettison’s everything He taught in the 4 Gospels. This is quite a turn of events.

Winfrey strangeness is also demonstrated in her belief that she embodies the spirits of past African American women. Her body somehow carries the spirits of the black female leaders that have come before her, (Ibid Mansfield, page 61). She even speaks of her daily prayer to her ancestors.

Chapter 4 lays out a who’s who of Winfrey’s present spiritual family and new age advisors proving the old adage that birds of a feather flock together. There is no doubt as to whom she loves to be around and what they share in common.

Winfrey has featured Rhonda Byrne and her book The Secret. The essence of The Secret is that we can have whatever we really want by thinking it and bringing it our way by a mystical law of attraction. It is a bit embarrassing in hind sight that one of the men featured in The Secret was self help guru James Ray. Ray is serving a 9 year prison term after people died in one of his bizarre sweat lodge experiments. What happened to the law of attraction?

Chapter 5 is also very informative and is titled Oprah’s Favorite Things. Mansfield lays out and elaborates on the seven basic principles that Winfrey lives by. He calls them; “The Seven Principles of Oprah Winfrey’s Philosophy”, (Ibid Mansfield, page 190). They are as follows;

The footnotes and index make this book a very handy reference regarding relevant topics and issues all around us everyday.

Mansfield ends on a noble note and even while suggesting that Winfrey may have opened herself up to the demonic world with her self help elixirs and propensity for guiding spirits he is still hopeful that she may repent and return not just to her ancestors but to the God of her ancestors.

Get Mansfield’s s book – digest it – it will equip you to better engage those around you who are caught up in the junk food and poison of our TV culture. .