The Day the Narrative Changed

Its not often that we see a social narrative change before our eyes but I humbly submit that I think we witnessed one on May 9th.  North Carolina passed a controversial measure to prohibit gay marriage and President Obama declared that he had changed his mind and gay marriage should be legal.

Just like, Arab Spring and Occupy Wall Street, hard facts and strong opinions spread around the world as everyone and their cousin posted meme after meme expressing their opinion in no uncertain terms. Many, many people rejoiced at the news that the President’s opinion had evolved. For North Carolina citizens, the task of defending their vote became something else: a war of sentiment and emotion.  The true extent of the moral strangeness that I discussed in my last post was laid bare for all to see.

Before May 9th, there was no shortage of disagreement about gay marriage or homosexuality itself. It was passionate. Christians no less so than non-Religious people. There was nothing new about one side claiming the other was unreasonable. There was nothing particularly novel about the debate about institutions and the significance of the word “marriage” but there wasn’t a lot of talk about bigotry. After May 9th, Bigotry was the prevailing narrative. 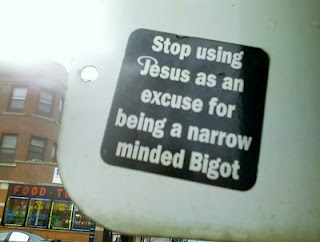 Over night the prevailing narrative was not that Christians were wrong for opposing same-sex marriage or even irrational but rather the only possible reason someone could be against gay marriage is because they are bigots masking their true hatred behind carefully worded arguments about the institution of marriage. After May 9th, opponents of gay marriage were just like the people who opposed miscegenation in the sixties. Don’t know what miscegenation is? Not surprising since its been relegated to the dustbin of history. Miscegenation is inter-racial marriage. Both types of marriage have been opposed on biblical grounds. Memes like this one were popping up all over social media: 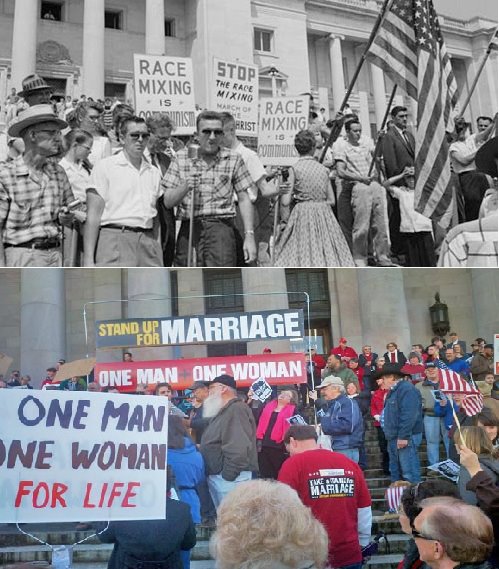 Of course, Christians were ubiquitous through out the news cycle and the blogosphere. One post by a professing Christian got a lot of attention.

Rachel Held Evans wrote a piece expressing the sentiment that “My generation is tired of the culture wars.” and that the church is wrong headed for being defined by its stance against homosexuality. Evans laments the statistics garnered from exit interviews with those who have left the church over the Christian treatment of homosexuality:

“The gay issue has become the ‘big one, the negative image most likely to be intertwined with Christianity’s reputation. It is also the dimensions that most clearly demonstrates the unchristian faith to young people today, surfacing in a spate of negative perceptions: judgmental, bigoted, sheltered, right-wingers, hypocritical, insincere, and uncaring. Outsiders say [Christian] hostility toward gays…has become virtually synonymous with the Christian faith.” Later research, documented in Kinnaman’s You Lost Me, reveals that one of the top reasons 59 percent of young adults with a Christian background have left the church is because they perceive the church to be too exclusive, particularly regarding their LGBT friends.  Eight million twenty-somethings have left the church, and this  is one reason why.

Some have remarked that it seems Evans is implying that if the Church simply eased up on gays, they (and their straight friends) would come flocking back to the pews in droves. I don’t know if that is what she is implying or not. Its hard to tell from the context. If so, then she is foolish and naive. I doubt all these generation Y’s etc. are only experiencing a queasy feeling about Christianity’s stance on homosexuality, I suspect rather that what offends is a conservative view of New Testament scripture passages that stems from a doctrinal worldview that is coarse up against the modern world. It just so happens that when Biblically literate Christians refuse to twist the plain meaning of texts like Romans 1, then the Church’s view of homosexuality becomes the most glaring example of “fundamentalism.” Couple that with the vast majority of society being accepting of homosexual practices and the near certainty that someone in the pew next to you knows someone who they love who is also gay, the prevailing consumer mentality of modern church goers and you have a recipe for discontent. However, Church Growth Movement aside, we don’t decide doctrine on the basis of popularity poll. If Christendom did that, it would nothing more than another demographically driven corporation seeking to sell its wares to the consumer.

But there was something that Evans said that struck me:

And most…I daresay all…have expressed to me passionate opposition to legislative action against gays and lesbians.

“When evangelicals turn their anti-gay sentiments into a political campaign,” one college senior on her way to graduate school told me, “all it does is confirm to my gay friends that they will never be welcome in the church. It makes them bitter, and it makes me mad too.  This is why I never refer to myself as an evangelical. Ugh. I’m embarrassed to be part of that group.”

I’m not naive enough to go chasing after the wandering sheep crying, “Hey we can ease up on gay marriage if you just come back. You like us don’t you?” I think there is far too much of that Sally Field — you like me- you really like me–mentality as it is. However, that quote got me thinking about the reasons we chose to defend doctrine with political action. What are the reasons we chose to lobby the state to use force to make our point in the public square? Is it to protect our children from the evil influence of society? Is it to protect the institution of marriage from secularization? (Do you know that you can get ordained to perform legal marriages in ten minutes on the internet? The state is not protecting the sanctity of marriage any more than its protecting us from dangers of cigarette smoking). Is it that we think that political power in the form of legislation is the best example of being salt and light?

Try as I might, I can’t find a biblical justification for using legislative power to protect society from anything. We are counseled to recognize the authority of the state (Romans 13:1). We are counseled to live our lives quietly in such a way that we may win the respect of outsiders (1 Thessalonians 4:11) but nothing about spending millions of dollars and thousands of hours fighting to preserve our culture even for our children.

I’m going to do a little dangerous prognostication about the future and because I’m becoming long winded, in my last post in this series, I’m going to suggest that evangelicals should change the narrative from what it is now and suggest some ways to do that.

My prediction is that gay marriage is an inevitability. Eventually there will be a federal law.  I predict that same-sex couples will not settle for tolerance and being left alone with their right to marry. Instead many will demand non-discrimination from religious organizations. They will insist that churches rent out their fellowship halls to same-sex weddings if they are going to do weddings for any hetero-sexual couples and will sue if they are denied. The stirrings of this are already appearing in states with legal same-sex marriage.

Christians who are tolerant of same-sex couples but who don’t want to be complicit in same-sex events as vendors, photographers etc. will claim freedom of religion and they will be ridiculed, persecuted, and hated for it. Christians who simply assert that homosexual practice is incompatible with Christianity for the same reason pork chops are incompatible with Judaism or a glass of wine is incompatible with Islam will be called bigots and worse. Churches will have to become explicit about their stance on homosexual practice and gay marriage.  They will have to do this in order to keep their members because their members will have plenty of churches to chose from who will tickle their fancy. To be clear I don’t think there is any amount of voting or lobbying or grass roots efforts that will change this. I don’t know if the anti-discrimination fights will get so bad that laws will be passed against evangelicals that discriminate but I believe the American Center for Law and Justice and the Rutherford Institute will have their hands full defending the freedom of religion of countless Christians who simply want to be left alone.

When I “shared” the blog post on my face book page expressing that I thought Rachel Evans had a point but by no means endorsing her view, I was accused of calling for a retreat from the culture conflict and capitulating to secularism by several dear friends. I can imagine my last post in this blog did not help that perception. I do not want you, dear reader, to get fatigued with commentary on same-sex marriage however, I don’t have the space to lay out my thoughts in detail on what should be done in light of the moral strangeness that is occurring. However, I do think there is a way and it does not involve either capitulating to secularism nor retreating from the public square. It will however involve three key shifts in focus:

Until next time, as always I look forward to your thoughts and opinions.