We’ve all seen it. The bumper sticker on the Prius that says: 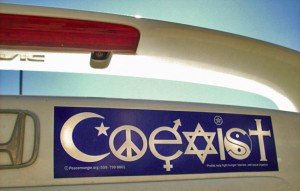 I never knew the history of this particular piece of  philosophic driving literature.  Jeremy Jackson at Enoch Magazine is the first person I’ve seen to ask: “Who’s behind this idea?” The short version is that the design originated as a submission by a Polish designer for a contest promoting tolerance and understanding at the unique Museum on the Seam in Israel which displays art and design that centers around international political and social issues. Jackson explains that what happened after that was not so tolerant at least for the designer:

Piotr Mlodozeniec combined symbols for the Muslim, Jewish and Christian faiths in the word and intended it to be used to promote religious tolerance – 2001. The symbol was then popularized on the global Vertigo tour of rock icon, U2, in the early part of the past decade. According to a published report, no one from the band had requested permission to use the symbol from its creator. The museum claimed rights. The legality of its use by U2 was in question. Subsequently, a company was quickly formed in Indiana that used the same design with trademark rights requested in 2003 and granted in 2005. Though Coexist LLP profited from the t-shirt sales immediately, it had not been granted permission from the artist who created the design and was actually strongly opposed by Mlodozeniec. Coexist LLP went on to sue numerous other vendors who did not have the rights to the design but were nonetheless selling products with the design.

There’s irony in there somewhere I just know it. Of course, there are problems with the idea of coexistence. As this parody illustrates. 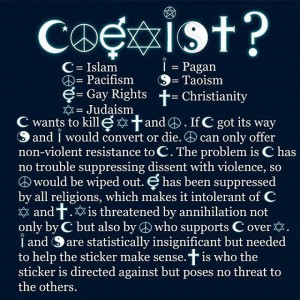 The clear “villain” here is Islam. It goes without saying (but of course must be said) that this is a gross oversimplification about the desires of the fastest growing religion. Not all Muslims want the same things. And neither do all Christians, pagans etc. But as with all satire, there really is a deeper point. All religions are not created equal. Coexistence is a problem not just because of violence but because of logic. Contradictory claims cannot all be true. All religions make some mutually exclusive claims about reality. They cannot all be correct. So coexistence faces a very real problem in that religions cannot simply be “different paths to the same thing,” as some Wiccans would have us accept. In response to Jeremy Jackson’s post about Coexist movement, one Wiccan wrote: “As a Wiccan I respect both of your blogs, and in it the truth of the Love for all [sic]. Of the message of Peace[sic]. I do believe in Christ and his teachings. Thank you for your point of view and sharing it.”

The difficulty with this Wiccan concept of love for all is that it is easy to simply ignore those teachings of Jesus that we don’t like or that destroy our cute little bumper sticker. Christianity is a proselytizing religion. It seeks to convince others that Jesus is the way, the truth, and the life. While peaceful, Christianity is not ideologically tolerant–if by tolerant we mean simply, “Hey you have your religion and I have mine, now let’s ignore both of them and concentrate on the kind of peace and love that can fit neatly on a bumper sticker because its all good.”As those often irreverent and sometimes profound folks over at Radio Free Babylon illustrate with their Coffee with Jesus web comic:

While Islam has its moderates, they are usually Muslims who deny the fundamentals of the Koran. Those who hold to strict interpretation of the Koran are usually the ones who are intolerant. This is, to my mind, a major difference between Islamic fundamentalists and Christian fundamentalists (however you define it). I don’t care how fundamentalist you read the New Testament, you will not find authority to burn gay people, forcibly baptize Jews, or wage war on others to make them Christian. Even though all of those were done in the name of Christ they were done inconsistently with the fundamental teachings of the New Testament. On the other hand, no matter how liberally you read the New Testament you will not find a Jesus who “lives and lets live.” To the contrary you will find a Jesus who dies violently in order to show that he is the only way to know God. That is either a masochist or a savior. There is no “peaceful” third option. Next week I’ll talk a little bit about what actual coexistence looks like. Until then, I invite your comments on bumper stickers, fundamentalism, and coexistence.