What Would Jesus Occupy? 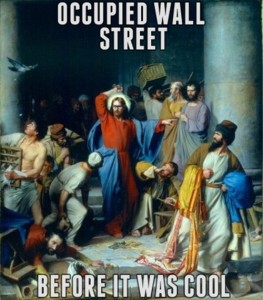 Well, it was only a matter of time that the Occupy Wall Street crowd would drag Jesus into there amorphous angst. I found this picture on one of my friend’s “wall” on Facebook. Of course I had to get involved. Unless you’ve been living under a rock, you know about Occupy Wall Street. What you know about their demands may be very little. Though a list of demands has been voted on and posted, this statement seems accurate:

There are no Official Demands of the Occupy Movement. that being said, multiple factions of the movement have been assembling to discuss and vote on the output and message for the movement. Below is a LIST OF PROPOSED “DEMANDS FOR CONGRESS” proposed by the website (occupywallstreet.org) which does not entirely represent the Occupy Wall Street General Assembly.

Fair enough. When you look the demands of the coalition of the outraged you do see some righteous indignation against corporate entities that “broke the law,” but with some ambiguity since this accusation is followed by ” (insert the most critical criminal acts here)” and then people can vote on what was criminal. There is a call for congress to override the Supreme Court decision that allows corporate campaign financing (Citizens United v. Federal Election Commission). There’s a call for more taxation of the rich encouraged by Warren Buffett’s op-ed slam of his fellow 1% though the details are strikingly vague.

But you are probably asking yourself dear reader, “What does this have to do with Jesus clearing the temple in the Gospels?” I’ll tell you.I’ve been asking myself that same thing for two days, and all I’ve come up with is “Not Much.”

The picture above implies that Jesus would be in solidarity with the OWS crowd. Some of you might have balked or sneered for half a second and imagined some great Capitalist/Republican/Conservative/Libertarian snark response. If you didn’t then you are more righteous than I am and I covet your prayers. But once I got that out of my system I starting thinking about what would Jesus think about all of this? And I’m not coming up with a good response. I can’t imagine him going all Whoopi Goldberg about student loan relief or talking about “The 1%”. (Though I did smile when I thought of him saying “Well, I did tell a parable about 1 sheep in 99 and how I would seek out the 1%. . . ” ) But I also can’t see him “occupying” my quasi Libertarian/Conservative turf, going on and on about how government is just as much to blame as corporations with a few choice metaphors about Caesar. Frankly I can’t see him commenting much at all about the demands of Occupy Wall Street. I can see him perhaps pointing out that while he did turn over the temple merchants tables and swing a whip around, it wouldn’t be in solidarity with OWS. So, let’s do something roughly half the people who will share that picture above on facebook won’t do. Let’s look at the context of the image:

13 The Passover of the Jews was near, and Jesus went up to Jerusalem. 14 And He found in the temple those who were selling oxen and sheep and doves, and the money changers seated at their tables. 15 And He made a scourge of cords, and drove them all out of the temple, with the sheep and the oxen; and He poured out the coins of the money changers and overturned their tables; 16 and to those who were selling the doves He said, “Take these things away; stop making My Father’s house a [f]place of business.” 17 His disciples remembered that it was written, “ZEAL FOR YOUR HOUSE WILL CONSUME ME.” 18

And He entered the temple and began to drive out those who were buying and selling in the temple, and overturned the tables of the money changers and the seats of those who were selling [b]doves; 16 and He would not permit anyone to carry [c]merchandise through the temple. 17 And He began to teach and say to them, “Is it not written, ‘MY HOUSE SHALL BE CALLED A HOUSE OF PRAYER FOR ALL THE NATIONS’? But you have made it a ROBBERS’ [d]DEN.” 18

What I notice is that there is an emphasis on business and given the size of the temple grounds, it would have been big business. But I don’t think this was Jesus’ protest of “Big Business,” but rather the commercialization of sacred space. For those traveling to Jerusalem to offer their sacrifices it would have been a hassle to bring a spotless lamb or some doves all the way from Egypt or Antioch or where ever. One of the enterprising religious/political parties decided this would be an excellent entrepreneurial project. Provide sacrifice animals for sale at the temple grounds. That way one could buy the animal there and not risk losing a lamb on the way to Jerusalem. Not only was he not anti-business per se, we even see his compassion on the merchants in the midst of his rebuking them. He didn’t let the birds loose but told those merchants to remove them. Why is that important? The money could be picked up, the sheep could be rounded up but once the birds were gone they were really gone.

Furthermore, we can’t have foreign money being used in Jerusalem (after all it has Caesar’s image on it) so the Sadducee party in power at the time conveniently provided a place to exchange one’s foreign currency for acceptable temple currency and only for a small fee. Given all this, the place must have looked like a cross between the Chicago mercantile exchange and a stock yard. One other tiny detail: all of this was set up in the court of the Gentiles–fitting since it would have been filled with Gentiles–the only place the Gentiles were allowed to pray. If you weren’t a son of Abraham, the court of the Gentiles was your last stop on your Jerusalem pilgrimage. Imagine trying to worship in the middle of a state fair or a swap meet and you get the idea why Jesus was so indignant.This wasn’t a protest, this was a claim by Jesus to be the Son of God and it was an eviction. Stop making my father’s house a place of business. . . My house will be a house of prayer for all people.

Now one could choose to downplay these details and focus solely on greed of any kind as someone I was discussing this with did. After I pointed out that you can’t extrapolate OWS sentiments from Jesus’ behavior in the temple, her response was (I’m paraphrasing) that greed is still at the heart of this story. Jesus was against greed. OWS is against greed. Therefore Jesus would be against the greed protested in Occupy Wall Street. She went on to argue that the great sin of corporations is making too much profit. I have no idea what profit the merchants in Jerusalem were making but I do know when Jesus had an opportunity to rip into a tax collector who made way more profit than the money lenders, instead of Occupying against Oppression, he invited himself to Zaccheus’ house and that “occupation” resulted in grace and celebration and probably some late night drumming (okay so maybe that’s one thing this story has in common with OWS)

By the way, I understand that the Sadducee party got all of its power by snuggling up to the Roman government–the real oppressors. They bought the privilege through a semi-bribe each year to Pontius Pilate. Make of that what you will. The point is that Jesus wasn’t “occupying” anything. He “occupied” what he claimed was his and his father’s house. In fact in the gospels you will find Jesus breaking that meek and mild caricature of himself specifically to root out religious corruption not government or financial. In fact, with all the details we have in the gospels, Jesus would have made a lousy political activist. As this song by The Lost Dogs so aptly expresses, he would be to busy doing more important things.

He’s not sittin’ up in the White House
Not subject to your big debate
Keeps His hands completely off Wall Street
Don’t own stocks, bonds or Real Estate
He ain’t up droppin’ bombs on people
Or workin’ on a college degree
He tunes out all them radio blowhards
Can’t stand the networks and religious TV

Jesus does “Occupy.” He occupies the hearts of those who have called on His name for salvation.