My Yoga is Easy: Hinduization of Christianity 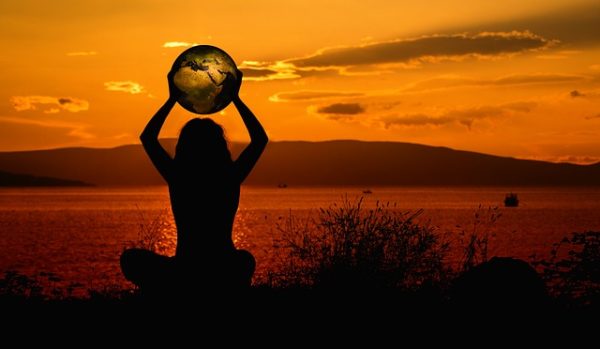 As I read these words from Isaiah 2:6-7 a week or so ago I was struck by the similarities between Israel of Isaiah’s day and the church of today. Both were prosperous in material things and both turned to “influences from the east.” Is there a link between material abundance and toying with idolatrous practice? Perhaps.

Isaiah’s warnings didn’t fall on deaf ears. He was well heard but those who heard him didn’t much like what he had to say. Tradition tells us that he was put inside of a hollow log and sawn in half during the reign of Manasseh (696-642). This is probably what Hebrews 11:37 is pointing to.

Discernment ministries in the United States today are not in harm’s way but do seem to be regarded as troublemakers by much of the church who seem preoccupied with amassing more material stuff while adopting Eastern religious practices. I was reminded of that last week when I received an email about Southwest Baptist University which said:

The October 2nd issue of the “Missouri Baptist Pathway” is reporting that Southwest Baptist University is offering a fitness class called “Yoga with Sarah” on campus. SBU has traditionally been a very solid school. I came to know Christ while attending this school. If others would join me in writing letters and sending material to President C. Pat Taylor, it would be appreciated.

We are aware that the Emerging Church, birthed in within a church that has great material resources, does not find any difficulty in merging Hinduism and Christianity together for a spiritual experience. Doug Pagitt, pastor and author in the Emerging Church movement in a CNN interview said:

The Jesus agenda is a whole life, is a complete life, is a healed life. So when people use it to relieve stress, to be healthy in their relationships, to feel good in their body, that’s a really good thing.

In fact, there’s a great little verse in the New Testament where it says, “Whatever is good, whatever is right, whatever is noble, whatever is praiseworthy, think upon such things.” And for so many of us, yoga has been one of those ‘whatevers’ that’s such a positive thing in our life.

As I did a little more research on Yoga in the church I came across and article about Parkwood Baptist Church. The opening paragraphs pretty much tell the story:

Marylyn Mandeville sits crossed-legged on a mat in front of 11 of her students. Her hands are folded as if in prayer, framed by the slogan on her T-shirt: “Know Yoga, Know Peace.” A gold cross rests on the Om symbol emblazoned on her shirt. “Namaste,” she says to the class, bowing deeply while offering the Sanskrit salutation “I bow to the God within you.”

No one in the Parkwood Baptist Church, not even the pastor, reacts to Mandeville’s T-shirt, gesture, or the New Age flute music playing in the background. They’re lying flat on their backs in Savasana, the Corpse pose, having endured two hours of vigorous stretching.

Former Hindu and now a leading Christian apologist, Ravi Zacharias, is credited with having said, “There is no Hinduism without Yoga and there is no Yoga without Hinduism.” He is certainly someone who would know. Many Evangelicals who are practicing Yoga claim they are merely doing exercises and this is not a spiritual practice and then insert biblical passages or the name of Jesus in place of the mantras. But if it is not spiritual why replace the mantras?

The various postures are called “asanas.” Our friend and former New Ager Marcia Montenegro sent out several links including the Jivamukti Yoga School which gives us the definition of Asana :

Performing the asanas connects us to all things. That makes sense from within Eastern mysticism because everything is god. By assuming the various positions the practitioner is reconnecting with all that is divine in recognition that everything is one. Carole Del Mul writes in “Warrior One”:

Some asanas mimic the shape of animals, while others honor the memory of great beings, saints or gods. When we assume these shapes, we not only consider the mechanics of the asana, we take on the energy and spirit of those beings.

For even though they knew God, they did not honor Him as God or give thanks, but they became futile in their speculations, and their foolish heart was darkened. Professing to be wise, they became fools, and exchanged the glory of the incorruptible God for an image in the form of corruptible man and of birds and four-footed animals and crawling creatures.

The Satyananda Yoga Glossary defines the “salute to the Sun” (surya namaskara) as:

A good article on this is on apologeticsindex.org by Dr. John Weldon in his paper Yogasanas: physical postures, spiritual method or both? that is worth consideration.

Charles Ryrie points out that some of the Corinthians were arguing that “just as food and the belly necessarily go together, so the body and sexual indulgence go together.” Paul’s response is clear and unrestrained in 1 Corinthians 6:15-20. Working out with the temple prostitutes was not to be done!

Israel of Isaiah’s day, the Corinthian church of the first century and the church of today share something in common. They had material stuff and allowed their heads and attention to be diverted through running after spiritual distractions into false worship. The One who said, “My yoke is easy” is also the one Whom Isaiah wrote about saying:

If He abandoned the house of Jacob couldn’t He abandon those churches and evangelical leaders who “are filled with influences from the east”? Is it possible this, at least in part, explains why so much of the church seems powerless? A call for repentance, a return to sound teaching and holy living disconnected from the love affair with Eastern mysticism is in order. And I am hoping no one has a hollow log that is just my size.Ω

© 2007, Midwest Christian Outreach, Inc. All rights reserved. Excerpts and links may be used if full and clear credit is given with specific direction to the original content.